The Santa Fe Sheriff’s Office completed its investigation Thursday into the fatal “Rust” shooting that left cinematographer Halyna Hutchins dead — and criminal charges against those involved, including Alec Baldwin, may be imminent.

“The District Attorney and her team of investigators and prosecutors will now begin a thorough review of the information and evidence to make a thoughtful, timely decision about whether to bring charges.”

Brewer said the prosecutor’s focus will be “on upholding the integrity of the process, enforcing the laws of the state of New Mexico, and pursuing justice.”

Brewer could not provide a timeline on when Carmack-Altwies will have her decision ready but said there are no statutory deadlines in New Mexico that dictate how much time she has to press charges, beyond statutes of limitation.

Juan Rios, a spokesperson for the Santa Fe Sheriff’s Office, had no immediate public statement to make but said the file was forwarded to Carmack-Altwies on Thursday for “prosecutorial consideration.”

Detectives were nearly done with the probe in August, but the investigation was stalled after Baldwin failed to turn over his phone records in a timely manner — and then handed them over to investigators on Long Island, which added an extra layer of red tape to the process.

“Those records are forthcoming,” the sheriff’s office said at the time.

Now that those records have been processed and the investigation is completed, it’ll be up to Carmack-Altwies if any crew members are charged in connection with the shooting.

The city’s top prosecutor had repeatedly said she needed the full investigative report from the sheriff’s office before she could determine if she’d move ahead with charges.

In an Aug. 30 letter to New Mexico’s Board of Finance, she signaled she was prepared to charge up to four defendants, “possibly” including Baldwin, but was waiting for the final bits of evidence to come in from the sheriff’s office.

On Oct. 21 last year, Baldwin was rehearsing a cross-draw with a replica Pietta Colt .45 on the set of the doomed Western when the gun discharged, striking Hutchins, 42, and director Joel Souza, 49.

Hutchins, a married mother of one, was pronounced dead soon after while Souza survived.

Baldwin has repeatedly denied firing the gun, saying it discharged accidentally, but an FBI forensic report released in August concluded the firearm couldn’t have gone off unless someone pulled the trigger.

This is a breaking story. Check back for updates. 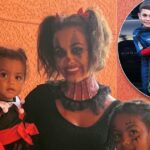 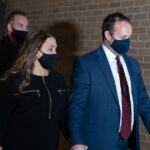 Are Josh Duggar and Anna Duggar Still Together, Married?