Disgraced FTX boss Sam Bankman-Fried already appears to be turning his crypto saga into a blockbuster, with the help of a top writer who penned Hollywood hit “The Big Short.”

Currently holed up at his parents’ home at Stanford University after being released on $250 million bail last week following being slapped with federal charges of financial fraud and money laundering, Bankman-Fried was visited by bestselling author Michael Lewis.

Sources exclusively told The Post Tuesday “Moneyball” writer Lewis spent several hours inside the residence just hours after Bankman-Fried had landed Friday, presumably talking about the latest twist in his crypto-downfall which has seen him go from a 30-year-old billionaire to facing up to 115 years in prison in a matter of weeks.

Bankman-Fried’s collaboration with Lewis is said to have been ongoing for around six months, long before financial irregularities were spotted, but it was first reported after FTX’s collapse in November, when entertainment newsletter The Ankler leaked a note from Lewis’ publishing agency pitching the book to potential movie rights buyers.

Bankman-Fried’s parents are both law professors at Stanford University and sources say they have hosted several gatherings since the beginning of their ankle-monitored son’s home arrest.

They have also upped security, paying for private armed guards and cameras to be installed. The house is also being watched by campus security from Stanford, who have blocked off the road it sits on from traffic.

Officials also announced Tuesday the case will now be presided over by US District Judge Lewis Kaplan.

A judge since 1994, Kaplan replaces colleague Ronnie Abrams, who recused herself last week after learning that her husband’s law firm advised FTX in 2021.

Known for his no-nonsense attitude, Judge Kaplan is no stranger to high-profile cases: He is currently overseeing the two civil suits by former magazine columnist E. Jean Carroll against former President Donald Trump.

In addition to a battery claim, Carroll alleges Trump defamed her by denying he raped her in a dressing room in the mid-1990s. Trump has previously tried to get both cases dismissed.

Kaplan also recently presided over Virginia Giuffre’s civil lawsuit against Prince Andrew, whom she claim sexually abused her when she was 17 at the London home of Jeffrey Epstein crony Ghislaine Maxwell. Andrew settled the case before it went to trial in Feb. 2022.

As of Tuesday afternoon, Bankman-Fried had not yet entered a plea. He is due back in court in New York next week and sources say they expect him to fly back private, accompanied by a security detail. 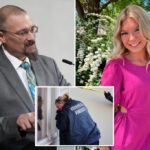 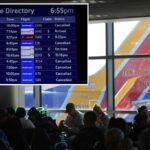