The armorer and crew on the ill-fated “Rust” set had issues with “negligent discharges” of firearm props in the week before cinematographer Halyna Hutchins was fatally shot by Alec Baldwin, a newly released police report says.

The final report, obtained by Deadline on Friday, sheds light on how the New Mexico film set was already allegedly in the throes of chaos before the deadly tragedy unfolded on Oct. 21, 2021.

Reese Price, a key grip on set who witnessed Hutchins’ shooting on the outskirts of Santa Fe, detailed the previous on-set issues to cops in the immediate aftermath.

He told police that an “accidental discharge” involving armorer Hannah Gutierrez-Reed and others had occurred “twice last week all in one day,” according to the report.

“The second time, one of the stunt actors went to cock the gun and it went off accidentally inside a shack. Reese expressed his concern about accidental discharges occurring on this particular set, which is something that is not supposed to happen.”

In a separate interview regarding the same incident, one of the film’s dolly grips, Ross Addigo, told police that Gutierrez-Reed had allegedly been prepping one of six guns when it fired toward her foot.

Just a few minutes later, he said a gun discharged at a cabin set but it wasn’t announced, the report details.

Addigo also claimed six cameramen walked off set that same day and that the head of the camera department had written a letter to the production company about the string of alleged mishaps.

Meanwhile, the set’s key rigging grip, John Ziello, claimed “protocols were not followed during the entire film” when he was asked if there had been prior issues throughout filming, according to the report.

Ziello also alleged that production “cut every corner they could.”

The 540-page police report confirms previous speculation about firearms accidentally going off on set prior to Hutchins’ death.

The release of the new report comes just weeks after the Santa Fe Sheriff’s Department submitted its investigative findings to prosecutors — including the evidence collected, investigative interviews and the FBI’s forensic analysis of physical evidence.

While New Mexico’s Office of the Medical Investigator determined the shooting was an accident, prosecutors are reviewing the findings to weigh criminal charges against those involved, including Baldwin.

The sheriff’s office had already made public a trove of files related to the deadly shooting, including bodycam footage of the fatally wounded Hutchins, witness interrogations, email and text threads, inventories of ammunition and hundreds of photographs.

Sheriff Adan Mendoza had previously described “a degree of neglect” on the set but said the decision about potential criminal charges would be left to prosecutors.

Baldwin had been rehearsing a cross-draw on the Western film set when the gun discharged, fatally striking 42-year-old Hutchins and injuring director Joel Souza, 49.

The Hollywood star filed a lawsuit last week against those on set involved in handling and supplying him the loaded gun.

They have all previously denied responsibility for the fatal shooting.

Guttierez-Reed, the armorer, has filed her own lawsuit against the prop supplier, alleging he made “false representations” and caused “live rounds to be introduced on the New Mexico movie set.” 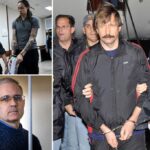 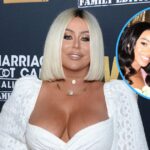