Nearly one million residents in Ukraine are facing blackouts after Russian forces pounded the country’s power infrastructure Saturday, with officials warning that air strikes could leave the country’s capital in the dark for “several days or weeks,” according to reports.

Russia has targeted Ukraine’s power grid since Oct. 10, two days after a truck bomb damaged the Kerch bridge that connects Russia and the annexed territory of Crimea. The relentless attacks have damaged up to 40 percent of the nation’s grid.

The attacks intensified Saturday, with local officials across the country reporting power outages, and advising residents to stock up on water in case of major cut-offs.

Ukraine’s air force said in a statement on Saturday that Russia had launched “a massive missile attack” targeting “critical infrastructure” as air raid sirens sounded across the country. The statement also claimed that Ukrainian forces had downed 18 out of 33 cruise missiles launched from the air and sea.

Most of those hit with power outages are in the western region of Khmelnytskyi, said presidential advisor Kyrylo Tymoshenko.

In Kyiv, Petro Panteleev, deputy head of the city’s administration, warned that Russian strikes could leave Ukraine’s capital without power and heat for “several days or weeks” as winter approaches. Temperatures in Kyiv have been dropping into the 40s in recent days.

“This possibility exists…we have to understand and remember this,” he told the Ukrainian outlet Ekonomichna Pravda.

“The aggressor continues to terrorize our country,” Zelensky posted. “At night, the enemy launched a massive attack: 36 rockets, most of which were shot down. Thanks to all air defense services for their work. To all energy workers and services that are currently working at the sites of impact and restoring our infrastructure. You are our heroes!”

Zelensky’s post included a photo of a burning power plant. “These are mean strikes on critically important objects. Typical tactics of terrorists,” he added. “The world can and should stop this terror.” 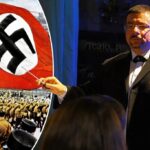 Putin plays like the Nazis with murder of conductor in Ukraine