At least 30 Ukrainians were killed Friday in a Russian missile strike on a convoy of civilian vehicles that was ferrying people from the Russian-occupied territory.

The strike took place on the outskirts of Zaporizhzhia, a Ukrainian-held city in the southern province of the same name — one of the four provinces purportedly annexed by Russia on Friday.

An 11-year-old girl and a 14-year-old boy were among the dead, Ihor Klymenko, chief of Ukraine’s national police, said in a statement.

A total of 88 people were wounded in the missile attack, including a 3-year-old girl.

The convoy of cars was assembling at a parking lot to try to cross into Russian-held territory. One checkpoint in the area has been open in recent days, allowing civilians to cross the front.

The impact from the missile strike threw chunks of dirt into the air and sprayed shrapnel across cars packed with belongings, blankets and suitcases.

Plastic sheets were draped over the bodies of a woman and young man in a green car. A dead cat lay next to the young man in the rear seat.

Two bodies lay in a white minivan in front of another car, its windows blown out and the sides pitted with shrapnel. The corpse of an elderly woman lay nearby in a pool of blood, next to her shopping bag.

A woman who gave her name as Nataliya said she and her husband had visited their children in Zaporizhzhia and were preparing to cross back into Russian-held territory.

“We were returning to my mother, who is 90 years old. We have been spared. It’s a miracle,” she said, standing with her husband beside their car.

Zelensky condemned the Russian strike in Zaporizhzhia, as well as recent attacks in Mykolaiv and Dnipropetrovsk, calling it the work of a “terrorist state.”

Zelensky posted on his Telegram channel Friday that only “terrorists” would target civilians and accused Russia of trying to seek revenge against Ukraine for its “steadfastness” and to make up for its own battlefield failures.

He said the “enemy” Russia “cynically destroys peaceful Ukrainians because he lost everything human a long time ago” and warned that the country would answer “for every lost Ukrainian life.”

Pro-Russian officials said, without evidence, that Ukraine was to blame for the attack in Zaporizhzhia.

Russia has repeatedly denied allegations that its forces target civilians, despite countless confirmed incidents documented by the United Nations and other international organizations. 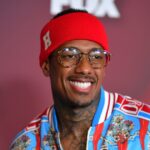 Nick Cannon Welcomes Baby No. 10 With Brittany Bell: Meet All of His Babies’ Mothers 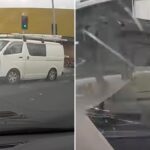