Ukrainian President Volodymyr Zelensky pledged that Russian soldiers who surrender will be treated in a “civilized manner,” comments made just hours after ​President Vladimir Putin signed a decree ramping up penalties for Russians who desert or refuse commands to fight.

“You will be treated in a civilized manner … no one will know the circumstances of your surrender,” the Ukrainian leader said in an address to the nation late Saturday​, speaking in Russian​.

“It is better to refuse a conscription letter than to die as a war criminal in a foreign land. It is better to run away from a criminal mobilization, than to be crippled and then held responsible in court for participating in a war of aggression,” he said.

“It is better to surrender to the Ukrainian army than to be killed in the strikes of our weapons, fair strikes from Ukraine defending itself in this war​,” he continued.

Just hours earlier, Putin signed a bill passed by the Russian parliament last week that punishes soldiers who desert or voluntarily surrender or disobey commands to fight with 10 years in prison and increases the penalty for looting during wartime to 15 years in prison. ​

Putin threatened to use “all the means at our disposal” to protect Russia in a war it launched against Ukraine on Feb. 24 as he announced that as many as 300,000 reservists will be called up to fight.

His announcement sparked widespread protests across Russia, prompted an exodus of military-aged Russians scrambling for one-way airplane tickets and sent Google searches on how to break your arm at home soaring.

But some officials in countries neighboring Russia worry that the number of Russians heading for the border could pose security risks for those in the European Union and are opposed to providing them shelter.

M​any of the “​Russians who now flee Russia because of mobili​z​ation were fine with killing Ukrainians, they did not protest then, it is not right to consider them as conscious objectors. There are considerable security risks admitting them and plenty of countries outside EU to go​,” said Edgar Rinkevics in a Twitter posting.

Finland also said it would “significantly restrict” access to Russians entering through its border with Russia, with Finnish opposition leader Petteri Orpo saying: “We must​ put our national security first.”

Putin’s partial mobilization, the largest since World War II, is intended to offset military gains by Ukraine after Kyiv launched a counteroffensive in August to claw back territory Russian forces captured in the northeast.

Moscow launched referendums in those four contested regions of Ukraine on Friday on whether to join Russia, elections considered a “sham” by Ukraine and the US and its European allies.

Russian Foreign Minister Sergey Lavrov said on Saturday that the regions that approve the annexation would be given “full protection” of Moscow.

“Following those referendums, Russia of course will respect the expression of the will of those people who for many long years have been suffering from the abuses of the neo-Nazi regime,” Lavrov said at a news conference after he addressed the United Nations General Assembly on Saturday.

As the Russian army continues to face setbacks in the seven-month-old war by ousting a general who was responsible for logistical operations and replacing him with Col. Gen. Mikhail Mizintsev, known as the infamous “Butcher of Mariupol,” who ordered an airstrike on a maternity hospital and an attack on a theater that was housing hundreds of children. 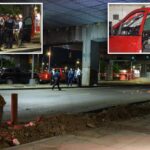 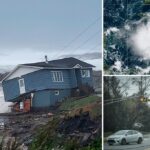