Tropical Storm Roslyn is continuing to weaken as it spins across Mexico after making landfall early Sunday morning as a powerful Category 3 hurricane with winds of 120 mph.

In its Sunday afternoon update, the National Hurricane Center said Roslyn has been downgraded to a Tropical Storm with winds of 70 mph and is spinning off to the north-northeast at 20 mph.

Roslyn made landfall around 5:30 a.m. local time in west-central Mexico near Santa Cruz in northern Nayarit.

The government of Mexico has discontinued all warnings south of San Blas, and the Hurricane Warning from San Blas to Escuinapa has been changed to a Tropical Storm Warning.

A Tropical Storm Warning is issued when tropical-storm-force winds (39 to 73 mph) are expected within the storm warning area within 36 hours.

The FOX Forecast Center believes Roslyn will continue to weaken rapidly now that the hurricane has made landfall.

In addition to damaging winds, heavy rainfall will also be a threat, but due to the storm’s quick movement, accumulations should not be as significant as would otherwise be experienced.

In addition to damaging winds, heavy rainfall will also be a threat, but due to the storm’s quick movement, accumulations should not be as significant as would otherwise be experienced.

Roslyn is expected to produce 4 to 8 inches of rain along the upper coast of Jalisco, Nayarit including Islas Marias. Localized amounts up to 10 inches are possible.

Southeastern Sinaloa, southern Durango into southwestern Zacatecas could see 4 to 6 inches of rain, with some higher totals of 8 inches possible.

That rainfall could lead to flash flooding and landslides in areas with rugged terrain.

Roslyn is the 19th named storm of the season in the busy Eastern Pacific.

Ten of the named storms so far strengthened into hurricanes, with three reaching “major” Category 3 status with winds of at least 115 mph.

The Atlantic Basin remains mostly quiet, with only a minimal chance of tropical cyclone development expected within the next five days.

The hurricane seasons in the Eastern Pacific and Atlantic basins run through November 30. 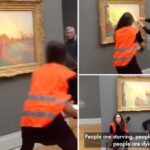 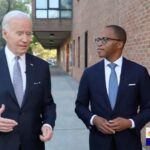 Biden says concerns about his age are ‘legitimate’