Robert Crimo Jr. — the father of the alleged Highland Park Parade gunman — was hit with seven counts of reckless conduct in connection to helping his son obtain the gun prosecutors say was used in the July rampage that left seven dead.

“Parents and guardians are in the best position to decide whether their teenagers should have a weapon. They are the first line of defense. In this case, the system failed,” Lake County State’s Attorney Eric Rinehart announced Friday, the day after the charges were filed.

“When Robert Crimo Jr sponsored his son, he knew what he knew and he signed the form anyway,” Rinehart said.

Each of the seven counts lodged against Crimo, who turned himself into Highland Park authorities Friday afternoon, represent each victim killed in July 4 parade shooting.

Because he was only 19 when he began collecting firearms, Bobby needed a guardian to sponsor his Firearm Owners Identification (FOID) card, which his father signed off for in December 2019, Rinehart said.

Crimo’s attorney said in July that Crimo wasn’t aware of his son’s history before signing off on the card. But Crimo’s brother, Paul, told CNN over the summer that Crimo likely knew about his son’s mental struggles, but “saw no trouble when he sponsored the card.

With his new firearms license, Bobby legally purchased at least five guns, including the Smith & Wesson M&P 15 he’s accused of using to fire more than 80 rounds during the mass shooting.

Just a few months before Crimo sponsored his son’s FOID card, Bobby tried to commit suicide and threatened to “kill everyone” in his home in two separate police-involved incidents, authorities have said.

During the second incident, police recovered 16 knives, a dagger and a sword from Bobby.

“Parents know what is going on with their teenagers. And so he knows what’s going on and it was reckless for him to participate in the FOID process in that way, in this case,” Rinehart said Friday. 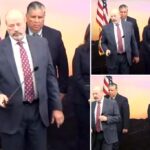 Texas mayor walks off with mic to avoid border questions 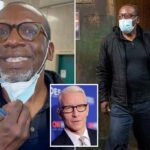