They’re back! The ladies of The Real Housewives of Orange County will undoubtedly bring the drama back to the small screen in season 17 of the beloved reality series, which wrapped production in November 2022. Keep reading for everything to know about season 17 of RHOC, including the cast, premiere date, which Housewife is jumping franchises and more.

Heather Dubrow, Shannon Beador, Emily Simpson, Gina Kirschenheiter and Tamara Judge are all returning to the Bravo franchise – which first premiered on the network in 2006 – for its 17th season.

Tamra, who joined the long-running reality show during season 4 until her season 14 departure in 2020, confirmed she would be rejoining the cast during an appearance on Watch What Happens Live With Andy Cohen in July 2022, telling host Andy Cohen, “The judge is back and drama is in session,” after months of speculation.

The Bravo patriarch responded, “Ladies and gentlemen, it’s true — Tamra Judge is returning to The Real Housewives of Orange County.”

The Vena CBD cocreator, who first returned to the franchise during season 2 of Girls Trip, opened up about the casting process during an episode of her “Two T’s in a Pod” podcast with The Real Housewives of Beverly Hills alum and cohost Teddi Mellencamp that same month, revealing that she wasn’t sure if she would join the RHOC cast for the forthcoming season.

“I’ve been talking with production for about two months now,” Tamra told Teddi at the time. “And I wasn’t really sure. Were they gonna ask me back? Not ask me back? I really didn’t know.”

During a November 2022 Q&A on Instagram, the former Cut Fitness owner teased what it felt like returning to the show that launched her reality TV career. “I forgot how exhausting it was! I laughed, I cried, I yelled, I drank a lot,” she wrote at the time via Reality Blurb, adding, “I made new friends, and reanalyzed old friends.”

While fans will see a familiar face return to the series, season 16 newcomers Noella Bergener and Dr. Jen Armstrong will not be appearing on the newest season.

“My family and my work are the most important aspects of my life, so I am stepping away from RHOC and focusing on them,” Jen wrote in a July 2022 Instagram post.

Is Vicki Gunvalson Returning to ‘RHOC’?

Though “OG of the OC” Vicki Gunvalson has been spotted filming scenes – and even traveling! – with the RHOC crew, she is not returning to the show as an official cast member.

“Just the Tres Amigas, we’re having lunch. We definitely filmed a little scene,” the Coto Insurance founder told E! News in October 2022, referring to her, Shannon and Tamra’s group nickname. “I’m going to be doing a little cameo – one or two times – that’s it this season. It was good.”

Are Shannon Beador and John Janssen Still Together?

Shannon started dating John Janssen in July 2019, just three months after her divorce with ex-husband David Beador was finalized. Though the pair went through some ups and downs – particularly during the initial COVID-19 outbreak and nation-wide shutdowns in 2020, much of which was documented during season 15 of RHOC – Shannon and John seemed to be going strong, as he regularly appeared on the show, often defending Shannon and sticking by her side amid the drama between her and the other cast members.

However, in January 2023, the mom of three revealed that John had ended their relationship in November 2022 – about a week after filming for season 17 wrapped.

“All I can do is repeat in my head what he said to me while we were filming,” Shannon told People. “We were in a great place. But seven days later, when the cameras were down, it was a completely different story. He told me he was done with the relationship. And to hear what he said to me then was absolutely devastating.”

When Does ‘RHOC’ Season 17 Premiere?

Though no official premiere date has been announced, fans can expect The Real Housewives of Orange County to return to Bravo sometime in the first half of 2023. 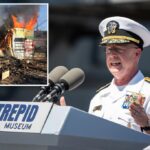 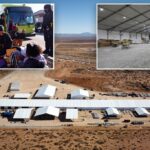