WASHINGTON — Residents of a Washington DC apartment building managed by missing executive Ana Walshe tell The Post that they believe her company, Tishman Speyer, has been hiding information about phony federal agents who were busted after infiltrating the Secret Service last year — and recently admitted to “voyeurism” in the building as well.

The tenants association of the Crossing building in the Navy Yard neighborhood near the Capitol say that they fear Arian Taherzadeh and Haider Ali, who pleaded guilty in August to crimes including secretly filming women in at least one of the building’s units, will avoid a public airing of their actions and that the company is withholding details from them.

Walshe, 39, was described to The Post as “very forceful and shady” in her handling of the aftermath of the scandal — even claiming to tenants on one occasion that she wasn’t Ana Walshe in an apparent effort to duck their questions following an April 6 FBI raid that busted Ali and Taherzadeh.

Many questions remain unanswered about the bizarre episode, in which the duo stockpiled tactical gear, weapons, ammunition and surveillance equipment — while providing free rent to a Secret Service agent and lavishing gifts and flashing badges to an array of local and federal law enforcement officers while claiming to represent the non-existent US Special Police.

One tenant provided The Post with a photo of what one of the imposters said was a master key code, meaning they may have been able to plant cameras throughout the building  — as questions remain about whether they were associated with foreign actors as well as Washington security agencies while infiltrating the complex.

“I am very concerned about the voyeurism allegations and after the men pled guilty, I attempted multiple times to gain information regarding which areas and units had been impacted, and if mine had been one of them, but never received any answers,” a female member of the tenant association’s board, who asked not to be identified by name, told The Post.

“I believe the management team here is doing everything they can to avoid sharing any information about the situation at all, even information not covered by an investigation, which makes me believe the information they are withholding could be considerably detrimental to them.”

A person who lived in the complex and was close to the two men, whom building management leaned on when security issues occurred, said that “I was able to witness much of [the infiltration’s] inner workings. They were able to establish audio and video surveillance in and outside their units, as well as potentially other areas of the property.”

“I personally viewed on Arian’s phone video footage showing residents engaged in nefarious behavior from cameras in other areas of the building, which were not connected to the ones in their individual units,” the source said.

“At times, Arian had used cameras throughout the property to find me, rather than call, when he wanted to talk to me in person — which made it obvious that he either had access to the building’s common area cameras or was able to establish his own system throughout the property. Furthermore, Arian and Haider had expressed that specific cameras in the building were theirs and not managements. “

Walshe, a mother of three who lived in Massachusetts but traveled often to DC, was regional manager for Tishman Speyer. There does not currently appear to be a link between her disappearance on New Year’s Day and the phony-agents scandal that rocked DC. Walshe’s husband Brian, a 46-year-old convicted con man, was arrested Sunday for allegedly lying to police. He reportedly bought $450 worth of cleaning supplies on Jan. 2.

One tenant who requested anonymity to share candid recollections about Ana Walshe called her “a wolf in sheep’s clothing” and a “very fake person” who alternated between a “power woman” persona and a meek manner while seeking to shut down or placate inquiries about how the Haider and Taherzadeh managed to score five units in the upscale building, for which they allegedly failed to pay $222,000 in rent from late 2020 through spring 2022.

Walshe “lied to people and said things she wanted you to hear in the moment,” one resident recalled.

At the time of her disappearance, Walshe was on the receiving end of resident demands for the results of an internal security review.

Walshe participated in a Sept. 19 meeting with the the tenant association board and wouldn’t share any information about the status of the review, which the company disclosed in a May email to residents.

Although her disappearance is believed to be linked to her husband and not the fake agents, the tenant said “I think there’s a lot of unknowns still and it’s very odd in general.”

Walshe, who tenants recall speaking with a thick Eastern European accent, was put in charge of the building at roughly the time of the April raid and tenants say it’s unclear if she was chosen to navigate the scandal or if her role began shortly beforehand.

Taherzadeh pleaded guilty in August to crimes including conspiracy, unlawful possession of a large-capacity ammunition-feeding device and voyeurism. He does not yet have a sentencing date. Ali pleaded guilty in October to conspiracy, bank fraud and unlawful possession of a large-capacity ammunition feeding device. He will be sentenced Feb. 24.

In addition to claiming to be part of the Department of Homeland Security, the Justice Department says Ali boasted that he had links to Pakistani intelligence. Ali allegedly had a passport with two Iranian visa from 2019-2020 as well as three older Pakistani visas.

“For nearly eight months, Crossing DC management has refused to provide any answers or clarity when it comes to residents’ safety and security following the FBI raid,” Nathaniel Hunt Kelly, president of the tenant association, told The Post.

“Rather,” he said, “they have done everything they can to obfuscate information from residents and the general public. Those living here have felt great concern and are left with more questions than answers. Tishman Speyer, in my experience, will operate within the greyest areas of the law, lie to individuals who seek answers, and provide little to nothing for residents’ peace of mind.”

A representative of Tishman Speyer, which manages an array of other properties including Manhattan’s famous 30 Rockefeller Plaza, on Monday pleaded for more time when contacted by The Post, citing Walshe’s disappearance, and ultimately provided no comment for this story.

Court filings that reveal some details of the infiltration operation describe what could be the plot of a spy-thriller movie.

“Taherzadeh stated that Ali had obtained the electronic access codes and a list of all of the tenants in the apartment complex,” according to one court filing from authorities. “Taherzadeh further stated that Ali was the individual that funded most of their day-to-day operation but Taherzadeh did not know the source of the funds.”

Authorities says that Taherzadeh and Ali “compromised United States Secret Service (USSS) personnel involved in protective details and with access to the White House complex by lavishing gifts upon them, including rent-free living.”

One member of the Secret Service was allowed by the men to live rent-free in a penthouse from February 2021 to January 2022 — at a market cost of more than $40,000 — while another federal law enforcement officer’s rent in the building also was covered, authorities say.

In a court filing, authorities said Taherzadeh “provided members of the United States Secret Service (USSS) and an employee of DHS with, among other things, rent-free apartments… iPhones, surveillance systems, a drone, a flat screen television, a case for storing an assault rifle, a generator, and law enforcement paraphernalia.”

The conspirators also “offered these individuals use of, what Taherzadeh represented to be ‘official government vehicles’” and allegedly “offered to purchase a $2,000 assault rifle for a United Secret Service Agent assigned to the First Lady’s protective detail.”

The four Secret Service agents were placed on leave pending a review of their actions. 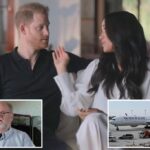 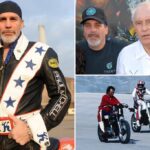