His misplaced loyalty is taking him right to prison.

Donnell Russell, former manager to R. Kelly, was sentenced Monday to a year in a federal lockup for calling in a shooting threat to a Manhattan theater that stopped the screening of a damaging documentary about the disgraced hip-hop star.

As a judge handed down the sentence, the Kelly loyalist insisted he’s not a bad person. The sentence won’t add time to the prison time he’s already expected to serve in another federal criminal case against him.

Russell admitted in court he “made bad judgments” when he briefly worked for the “I Believe I Can Fly” singer as Kelly faced growing sexual abuse allegations.

“I’m not a horrible person,” Russell said in court, though US District Judge Paul Gardephe slammed him as someone who took part in “serious criminal conduct” in “a misguided attempt to protect someone who was a prolific abuser.”

Russell, 47, said he originally got involved with the Grammy winner assisting with intellectual property matters to help Kelly pay legal bills. The two Chicago natives had met decades earlier before they reconnected.

Kelly was convicted of sex trafficking and racketeering last year and was sentenced to 30 years in June. Sentencing on his conviction for producing child pornography and enticing girls for sex in Chicago is set for Feb. 23.

Before the guilty verdicts against Kelly, Russell worked to quiet those abuse allegations by threatening at least one accuser — and then phoned in a shooting threat to the Manhattan premiere of Lifetime’s “Surviving R. Kelly” docuseries that shut down the show in 2018.

The phone call claimed someone at the event had a gun and was going to fire, triggering the event’s cancellation and evacuation.

The series focused on accusations against Kelly that he sexually abused women and girls; some of the accusers were scheduled to speak on a panel after the premiere.

“I was happy that it ended. I didn’t question how it ended,” Russell said in court Monday.

Russell was convicted in July for threatening physical harm through interstate communication connected to the theater threat, but was acquitted of conspiracy.

Days after that guilty verdict, he pleaded guilty to interstate stalking involving one of Kelly’s sexual abuse accusers and sentenced to 20 months in prison last month.

He is expected to turn himself in next year to serve the two sentences simultaneously. 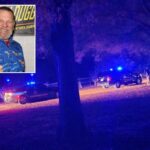 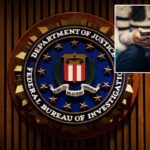