The Queen Consort’s official monogram — which will be used on official correspondence — was unveiled Tuesday by Buckingham Palace.

Selected by Camilla herself from a series of designs presented to her, the new insignia is now the senior royal’s personal property.

Camilla’s monogram will be featured on her personal letterheads, cards, and gifts. It’s expected to be seen for the first time this weekend when she lays a cross at Westminster Abbey’s Field of Remembrance.

“The Queen Consort’s new cypher is made of up of Her Majesty’s monogram (‘C’ for Camilla, and ‘R’ for Regina, Latin for Queen) and a crown. The cypher will be used on official correspondence,” the Royal Family’s official Twitter account said Tuesday.

According to BBC News, the royal insignia was created by Professor Ewan Clayton — a calligrapher who lived as a Benedictine monk in the 1980s.

He worked closely with the artist behind Charles’ monogram, Tim Noad, who is a calligrapher at London’s College of Arms, which is responsible for creating and maintaining official registers of coats of arms.

The release of the Queen Consort’s insignia follows that of her husband, which was unveiled to the world in September.

The King’s monogram, designed by the College of Arms, overlays his initial “C” for Charles with an “R” for Rex — meaning king in Latin — and features “III” in the center of the “R” to make Charles III. The crown is depicted prominently above the letters.

The process of updating royal monograms is often long and drawn-out as different departments swap Queen Elizabeth’s for her son’s.

Cyphers from past monarchs can still be found on public buildings and post boxes throughout the country to this day.

His Majesty became King following the death of his mother, Queen Elizabeth II, who died on Sept. 8 aged 96.

Ruling from 1952 until her death, Queen Elizabeth II was the longest-reigning monarch in British history. 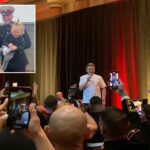 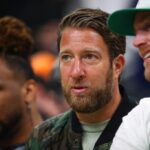