An English prison nurse went from the medical center floor to behind bars herself after exchanging flirty texts and calls with a male inmate.

Elyse Hibbs, 25, was sentenced Tuesday to six months in prison for misconduct in public office due to her inappropriate relationship with the prisoner while she was employed at HMP Parc in Brigend, BBC News reported.

Hibbs provided medical treatment to the inmate at HMP Parc in 2018 and apparently left a lasting impression.

About three years later, after the inmate was transferred to a different prison, he enlisted his own mother and a friend to help track Hibbs down on social media in June 2021.

Over Instagram messages, Hibbs provided her phone number to them and she and the inmate began speaking over the phone and texting.

The unnamed prisoner “nurtured” his relationship with Hibbs over a period of five weeks and five days and manipulated the nurse, prosecutor Matthew Cobbe said.

Cobbe said the exchanges — some of which were recorded over the prison phone — were “flirtatious” and that the pair expressed that they loved one another.

He added that the inmate was “quite clearly manipulating her.”

Their conversations revealed that he “thought very little” of Hibbs.

The pair also discussed the inmate’s possession of an illegal mobile phone — which Cobbe said Hibbs failed to report.

Hibbs called out sick from work at the beginning of June and resigned by July 6, according to the BBC.

Less than two weeks later, she was arrested for the inappropriate relationship and has been expelled from a career as a registered nurse by the Nursing and Midwifery Council.

Hibbs’ attorney Adam Sharp called for her sentence to be suspended.

He claimed Hibbs, who was 23 at the time of the relationship, was young, impressionable and “emotionally vulnerable” when she began texting and calling the inmate.

Sharp added that Hibbs was “exploited” by the inmate and was afraid to end the communication because she felt threatened.

He said his client did not earn any financial gain or other benefits from the relationship and that she didn’t participate in any criminal activity.

“The misconduct was not face-to-face, it wasn’t even within physical proximity to each other,” Sharp said.

Hibbs also expressed remorse for her actions, he said. He argued her sentence should be suspended for those reasons.

She chastised Hibbs for her actions, saying she was in a position of responsibility within the prison. 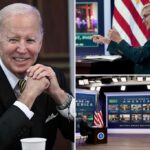 Granholm calls Biden ‘the man with the cash’ as firms get $2.8B for EV batteries 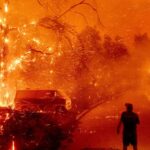