After years of publicly trashing his family, Prince Harry now says he wants to get “back” his once-close dad and brother.

“I want a family, not an institution,” the 38-year-old exiled royal moaned to ITV News of his royal relatives.

But “they’ve shown absolutely no willingness to reconcile,” whined Harry, who has repeatedly attacked them in interviews and now a memoir, “Spare,” set to be published next week.

“They feel as though it is better to keep us somehow as the villains,” Harry said, making clear he and wife Meghan Markle are the clear victims, even as they brand his family as racist.

“I would like to get my father back,” he said of King Charles III, who he has roundly blamed for his pains as a young royal.

“I would like to have my brother back,” he added of heir to the throne Prince William, 40, who he painted as a screaming bully during his nearly six-hour Netflix docuseries.

The rebellious royal also spoke to Anderson Cooper for a “60 Minutes” special Sunday that CBS News teased as being “revealing” and “explosive.”

In a teaser aired Monday on “CBS Mornings,” Harry blamed his family for him taking his trashing public.

“Every single time I’ve tried to do it privately there have been briefings and leakings and planting of stories against me and my wife,” Harry told Cooper.

“You know, the family motto is ‘Never complain, never explain,’ but it’s just a motto,” he said, explaining that the complaining is happening “through leaks.”

“They will feed or have a conversation with the correspondent,” Harry reckoned. “And that correspondent will literally be spoon-fed information and write the story.

“So when we’re being told for the last six years, ‘We can’t put a statement out to protect you,’ but you do it for other members of the family, it becomes– there becomes a point when silence is betrayal,” he complained. 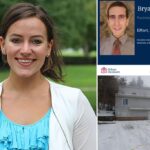 Bryan Kohberger’s former professor said he was a ‘brilliant’ student 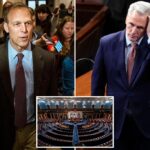 McCarthy may be short of votes needed to become House speaker