Prince Harry believes his troubled relationship with his brother would not have gotten to its breaking point if their late mom, Princess Diana, was still alive.

The Duke of Sussex made the comment in Tuesday night’s airing of “The Late Show with Stephen Colbert” when the host quizzed him on his broken relationship with Prince William.

Colbert asked Harry, 38, about the now-infamous fight the brothers had in which Harry alleged in his new book that William physically attacked.

“If your mother were still alive, do you ever think about how she might handle this moment?” Colbert asked.

“We wouldn’t have gotten to this moment,” Harry replied.

“It’s impossible to say where we would be now — where those relationships would be now, but there is no way that the distance between my brother and I would be the same,” he added.

In his memoir “Spare,” which he was promoting on Colbert, Harry wrote that William pushed him to the ground and onto a dog bowl in Nottingham Cottage in 2019.

He and Markle announced their split from the royal family about two months later.

Harry said his relationship with his brother was doomed from birth as William was set up to become heir and he got little attention as a spare.

Now, their fractured relationship has been unfairly pinned on Markle, Harry said.

The exiled royal previously said he suspected their mother would be “heartbroken” over her sons’ deteriorating relationship with one another.

“I think she would be heartbroken that it’s ended up where it’s ended up,” he said on “Good Morning America” Monday.

During his late show appearance, Harry also said that he never felt closer to his mother over the past two years. 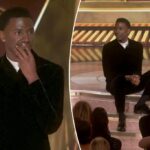 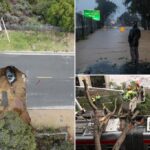