The team behind Prince Harry and Meghan Markle’s upcoming Netflix documentary, Harry & Meghan, has responded to backlash over using stock images and photos in the project.

“You use stock images to tell a story,” an insider familiar with the documentary told The Telegraph on Tuesday, December 6. “It’s not meant to be literal in a trailer.”

The source also said that Harry, 38, and Meghan, 41, had no editorial control of what made it into the promotional clip, adding that the tactic is “standard practice in documentary and trailer production.”

The couple faced backlash when viewers noticed a photo of Harry and Meghan being followed by the press in the trailer, which was taken at a Harry Potter premiere held years before they even met.

Another portion of the trailer that was questioned was a piece of footage filmed outside a Katie Price court case. As the clip played, the Duke of Sussex narrated, “I was terrified, I didn’t want history to repeat itself.”

The documentary’s first trailer was released on December 1 and gave fans a glimpse into the private couple’s personal lives, capturing intimate moments including their 2018 wedding reception and the Suits alum showing off her baby bump during one of her pregnancies.

In the second trailer, released on December 5, the pair reacted to the media’s perception of Meghan. Meanwhile, Harry compared the situation to how the press treated his late mother, Princess Diana.

“The pain and suffering of women marrying into this institution, this feeding frenzy,” Harry said.

After magazine covers showing how Diana was regularly criticized by the press appeared onscreen, Meghan added, “I realized they’re never going to protect you.”

“I was terrified,” Harry continued, explaining that he “didn’t want history to repeat itself” when it comes to how the public treats his wife.

The clip also depicted how the media has portrayed Meghan in several different ways since the pair began dating in 2016. Piers Morgan was seen describing the “Archetypes” podcast host as a “royal rockstar” before his attitude changed and he began referring to her as “Princess Pinocchio.”

Harry and Meghan caused a rift in their family when they stepped down as senior members of the royals and revealed their plans to become “financially independent” in January 2020.

The couple relocated to California and later explained the decision during a tell-all interview on CBS in March 2021.

“We never left the family,” Meghan said at the time, noting that they only chose to stop their professional roles. “We were saying, ‘OK, if this isn’t working for everyone, we’re in a lot of pain, you can’t provide us with the help that we need, we can just take a step back. We can do it in a commonwealth country.’ We suggested New Zealand, South Africa.” 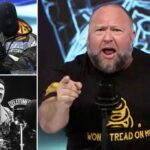 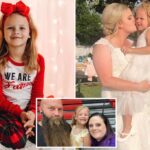