An excerpt from Prince Harry’s bombshell new memoir, “Spare” reads like something out of the iconic 1970s British TV show “Upstairs, Downstairs” about a wealthy family and their servants — but with a royal twist.

Turns out Harry was green with envy over how luxuriously Prince William and Kate lived in their “magnificent” Kensington Palace apartment — while he and Meghan Markle made do early on in a cramped cottage with Ikea furniture.

The Duke of Sussex complains in “Spare,” that his first home with Meghan, Nottingham Cottage, was a far cry from William and Kate’s lavish “Apartment 1A,” although they both are on the grounds of Kensington Palace, the Daily Mail reported.

“The wallpaper, the ceiling trim, the walnut bookshelves filled with volumes of peaceful colors, priceless works of art. Magnificent. Like a museum,” he wrote about Prince William’s digs.

“We congratulated them on the renovation without holding back the compliments while feeling embarrassed of our IKEA lamps and the second-hand sofa we’d recently bought on sale with Meg’s credit card on sofa.com.”

Apartment 1A is said to have 20 rooms, and has long been William and Kate’s London base. The home was refurbished to the tune of $5 million of taxpayer money in 2016 but the couple paid for fixtures and furnishings themselves.

In contrast, Nottingham Cottage, or “Nott Cott,” where Harry and Meghan started married life, is a modest two-bedroom home — so small it reportedly shocked Oprah Winfrey when she visited them there for tea, the couple claimed in their recent Netflix documentary.

Winfrey told them “no one would ever believe” they were living there.

In their Netflix documentary, Meghan said: ‘People thought we lived in a palace and we did. Well, a cottage in a palace.’

Added Harry: “The whole thing is on a slight lean, [with] really low ceilings. So I don’t know who was there before but they must have been very short.”

“Spare” accidentally went on sale in Spain in a Spanish translation last week ahead of its official release Jan. 10. 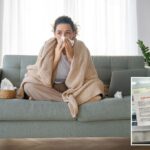 ‘My cat just had puppies’ 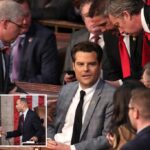