Lottery players were in the running for the massive $353 million Powerball jackpot during Wednesday’s drawing.

According to the Powerball website, no ticket holder won either the $2 million or $1 million prize.

Fourteen tickets were one number shy of striking the jackpot.

The next Powerball drawing is Oct. 8 while the estimated jackpot increases to $378 million. Jackpot hopefuls have a cash option of $198.7 million.

The last winner of the Powerball jackpot was in August, when a single ticket sold in Pennsylvania matched all six numbers for the $206.9 million prize.

A $1 million ticket was bought in New Jersey for Tuesday’s Mega Millions lottery ticket drawing, though no winner was declared for the top prize.

The next drawing for the Mega Millions jackpot will be on Friday, as the prize will hit $410 million. 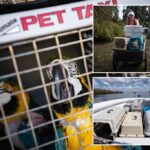 Rescuers save 250 parrots from Pine Island after Hurricane Ian