The killer of four University of Idaho students likely stalked through multiple rooms across two floors in their house and could have slipped in through a sliding door in the knife rampage, records indicate.

Floor plans of the house where the slain students lived show two bedrooms on the third floor and two on the second with a sliding door on the second level that is accessible to the outside.

The house plans of 1122 King Road obtained by the Daily Mail show provide a clearer layout of the sloped property in the city of Moscow.

Chapin and Kernodle, who were dating, were likely together on one floor — and Mogen and Goncalves likely on a separate floor.

To confront the victims on the third floor, the suspect would have passed through multiple common rooms, including the living room, on the second level, according to the Mail.

Police declined to say Wednesday if the suspect entered through the front door or the sliding door.

The first floor had two other bedrooms where the surviving roommates were during the rampage.

The 2,300 square feet home also has three bathrooms and was most recently rented in June for $2,498 per month.

“One of the top campus housing options available! — Sought after location within close walking/biking/driving distance to campus and Greek Row,” the previous listing states.

Moscow police have ruled out several people as suspects, including the roommates and an ex-boyfriend of Goncalves. A man seen in security footage near the Mogen and Goncalves at a foot truck on the night they died has also been ruled out, police said.

No murder weapon has been recovered. The FBI and state police are also part of the homicide probe. 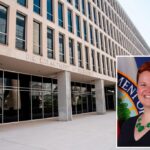 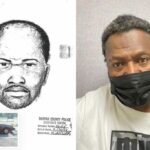