Two vintage warplanes collided over an airshow in Dallas, the FAA said.

The collision happened about 1:20 p.m. as they were flying over the Wings Over Dallas Air Show at Dallas Executive Airport.

There was no official word on casualties but an ABC producer tweeted that six people may have been killed.

The FAA identified the plans as a Boeing B-17 Flying Fortress and a Bell P-63 Kingcobra and said it was unknown how many people were on both aircraft.

But a spokeswoman for the Commemorative Air Force, which sponsored the show, told ABC News that there were believed to be five crew members on the B-17 and one on the single-seat P-63.

Video posted to Twitter shows a B-17 colliding with a smaller plane sending debris flying and then fireballs as both hit the ground.

“I just stood there, I was in complete shock and disbelief,” spectator Anthony Montoya, 27, said. “Everybody around was gasping. Everybody was bursting into tears. Everybody was in shock.”

A woman watching the planes from a shopping center parking lot can be heard on another video saying “Oh no. Oh no” as they collide and then “Oh my God!” as she sees the fireball.

Dallas lawyer Christopher Kratovil tweeted “A WWII bomber just crashed at Dallas Executive Airport….Wing just came off as it made a pass over the airfield. Tragic and horrible to witness” along with a photo of spectators and a plume of black smoke.

An announcer can be heard in one video telling spectators to stay off their cell phones to keep channels clear for emergency responders and that children “may wish to turn away” from the scene.

Dallas Mayor Eric Johnson tweeted “As many of you have now seen, we have had a terrible tragedy in our city today during an airshow. Many details remain unknown or unconfirmed at this time. The @NTSB has taken command of the crash scene with @DallasPD and @DallasFireRes_q continuing to provide support.”

He added: “The videos are heartbreaking. Please, say a prayer for the souls who took to the sky to entertain and educate our families today.” 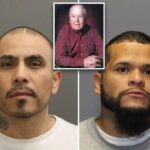 Renewed interest in Earl Olander’s murder, which was solved by with help from bible bible 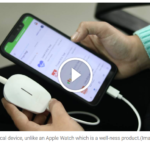