Transportation Secretary Pete Buttigieg took his husband Chasten along for the ride on a military aircraft when he attended the Invictus Games in Europe last year, according to a report on Wednesday.

Buttigieg traveled from Joint Base Andrews outside DC to Rotterdam, the Netherlands, on a “MilAir Flight” on April 15, 2021, Fox News Digital reported, citing a calendar obtained by Americans for the Public Trust. He returned two days later.

President Biden announced April 13 that Buttigieg would lead a US delegation to the Invictus Games, which were founded in 2014 by Prince Harry and are held for wounded, injured and sick service members.

Prince Harry and his wife, Meghan Markle, the Duke and Duchess of Sussex, also attended the games in The Hague.

Buttigieg, who served in Afghanistan, and his husband were pictured at the event — with the couple even sitting with the Sussexes and the rest of the US delegation for an official photograph, despite Chasten not being a formal participant.

“Secretary Buttigieg’s travel woes keep piling up with this newest revelation that he and his husband took a private jet for a European trip,” ​Caitlin Sutherland, the executive director of Americans for the Public Trust​, told Fox News Digital. “Taxpayers, who just had their holiday plans completely upended because of Buttigieg’s travel mismanagement, should be furious.”

“Buttigieg manages to avoid all the problems he has created by flying private military jets around the world for non-military purposes, while everyday Americans bear the brunt of his detachment from their travel realities,” she continued.

A spokesperson for the Department of Transportation emphasized the importance of the Invictus Games, but did not respond to questions about whether Buttigieg would reimburse the government for Chasten’s travel.​

“The Secretary was proud to be asked to be part of the Presidential Delegation that the State Department organized for the Invictus Games  — an international event supporting wounded, injured and sick servicemen and women, both serving and veterans,” the spokesperson told Fox News Digital. “The delegation met with the US team of wounded veterans and active service members as part of the visit.”

Former President Donald Trump accepted the resignation of then-Health and Human Services Secretary Tom Price in September 2017 after it was revealed Price spent more than $1 million of taxpayers’ money for government and chartered private jets.

Price reportedly reimbursed the government for the cost of the flights.

In August 2020, then-Secretary of State Mike Pompeo took heat for having his wife, Susan, accompany him on an official trip to Europe .

At the time, the State Department said legal and ethics advisers cleared Pompeo’s wife to join her husband, saying the “trip will advance our country’s foreign policy goals.” 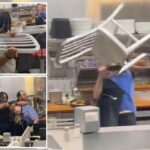 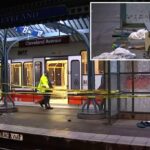 Elderly man has part of his face, ear chewed off in attack