People are U-Hauling it out of Democratic-run New York and California — and flocking to lower-taxed places, including Republican-led Texas and Florida, a new study released Tuesday found.

The report by U-Haul truck rental moving service shows that sunny California — the Golden State — has gone from Dreamin’ to Leavin’, while more folks are departing the once mighty Empire State than are moving into New York.

California ranked dead last year, with more one-way U-Haul rentals leaving the state than moving in — while New York ranked a lowly 46th. The rest of the bottom six was rounded out by a group of other famously blue states: New Jersey at number 45, Massachusetts at 47, Michigan at 48 and Illinois at 49.

“Demand for equipment out of California, Illinois and New York remained strong in 2022, as more people opted to leave areas of the West Coast, Northeast and Midwest,” the U-Haul report said.

Where are folks moving to? Texas is the No. 1 growth state for the second consecutive year and the fifth time since 2016, U-Haul reports.

Florida, which ranks second, has been a top-three growth state seven years in a row.
South Carolina, North Carolina, Virginia, Tennessee, Arizona, Georgia, Ohio and Idaho round out the top 10 growth states — with more U-Haul trips going in than leaving the states.

The U-Haul study mirrors similar reports released by other moving companies including, United Van Lines, which last year found the NY-NJ metropolitan region suffered the most departures in the country.

Meanwhile, the Empire Center for Public Policy reported last month that New York State lost 180,341 people during the 12 months ending July 1, 2022 and a total population decline of  524,079 since the decennial census count of April 1, 2020 amid the coronavirus pandemic.

New York also lost some of its millionaires, who pay a disproportionate share of its state and city tax bills, a recent Empire Center analysis of IRS data found, including well-heeled Manhattan residents.

“We must reverse the trend of people leaving our state in search of lower costs and opportunities elsewhere. We can do this,” Hochul said.

“We have to make our state more affordable. Yes, people want to be here. . . And New Yorkers are just struggling to pay rent, food and gas to get to their jobs. They’re hurting. Our people are hurting. We’re going to fight for them.”

Florida Gov. Ron DeSantis, a leading Republican hopeful for president in 2024, said people are flocking to the Sunshine State from New York and other Northeast states because of lower taxes and more sane criminal justice and educational policies — a dig at the Empire State’s unpopular cashless bail law.

Do-it-yourself movers arriving in the Sunshine State accounted for 50.7% of all one-way U-Haul truck traffic in and out of Florida, compared to 49.3% of departures.

“It [freedom]  lives in the dreams of the historic number of families who have moved from thousands of miles away because they saw Florida as the land of liberty and the land of sanity,” DeSantis said.

“Over the past few years, as so many states in our country grinded their citizens down, we in Florida lifted our people up. When other states consigned their people’s freedom to the dustbin, Florida stood strongly as freedom’s linchpin.”

Texas Gov. Greg Abbott — who has been embroiled in a spat with New York officials for busing migrants here — tooted the Lone Star State’s horn when asked about being the top destination by U-Haul customers.

“The Texas economy is booming. People and businesses vote with their feet, and they are choosing to move to Texas more than any other state in the country,” said Abbott spokesperson Renae Eze.

California Gov. Gavin Newsom, considered a Democratic White House hopeful if President Biden doesn’t seek re-election or as a candidate in a post-Biden era, would have to defend a record of governing amid population losses in the nation’s most populous state.

The U-Haul Growth Index is an effective gauge of how well states and cities are attracting and maintaining residents, the company said. 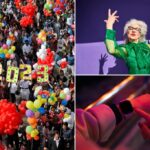 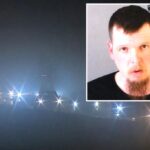