The man accused of attacking Paul Pelosi with a hammer sexually abused his sons and stepdaughter as children, one of the alleged victims claimed in online posts.

“This attack on Nancy Pelosi’s husband came as a shock to me, though not much considering the kind of extreme abuse he had inflicted on me and my brothers,” the 20-something Gonzalez wrote.

Gonzalez described DePape as someone who “did genuinely try to be a good person,” but added “the monster in him was always too strong for him to be safe to be around.”

She said her mom met DePape — whom she describes as her “father” — in Maui while pregnant with her. The couple moved to the Bay Area shortly after Gonzalez was born.

They split in 2014, when Gonzalez was 13. Gonzalez said her mother “kicked David out because of his toxic behavior.”

Six months later, Gonzalez’s brother Nebosvod started to remember their father “physically and sexually abusing me and my brothers, which started when we were very young and continued until around 2008, when [Gonzalez] was 7,” she recalled.

Although their mother filed a police report accusing DePape of abuse “the case was not managed properly, so nothing was done about it,’ wrote Gonzalez.

She claimed she and her younger brother Daniel also “started getting memories of his abuse.”

Despite their troubled past, Gonzalez said she still loves DePape and called him a “quiet” man who was “never violent, yelled or even swore.”

She also alleged DePape’s single mother “was a person who would beat him almost to death.”

“He barely opened up about himself or his past but it was obvious that he grew up in hell and that we didn’t know the worst of it,” she wrote.

Gonzalez said DePape would regularly take her and her siblings to beaches and parks when they were young and one time said at a park that he’s sorry ‘”for everything I have done.”

She said she hasn’t seen DePape since she was 13, but did contact him about 4 months ago. She said the conversation ended when he refused to admit to the abuse.

DePape’s name is tied to two conspiracy blogs. One, titled “Big Brother Censorship Hell,” features a banner warning readers that “The elites/ruling class never censor themselves. You can still turn on any mainstream news channel to hear day and night the narrative put forth by the people who rule you.”

The second blog, frenlyfrens.com, hosts more detailed posts under categories like “Climate hysteria” and “Corruption.” Several of the posts espouse anti-Semitic conspiracies, including one that reads “Isn’t their [sic] a trope about Jews ABUSING the courts to rip people off.”

“I did not agree with all of his views, it made me happy to see that he had strong opinions on issues that our world is facing today,” said Gonzalez.

A spokesperson for Nancy Pelosi said her husband was expected to recover.

Depape was due to be charged with attempted murder, assault with a deadly weapon, elder abuse, burglary and “several other additional felonies,” police said.

Nancy Pelosi, also 82, was in Washington with her protective detail at the time of the attack, US Capitol Police confirmed in a statement. The agency is assisting the San Francisco police with the investigation, as is the FBI. 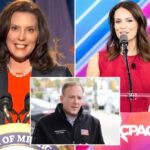 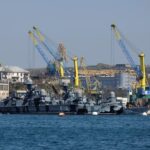 Russia blames Ukraine and Britain for drone attack in Crimea