The parents of those killed by Parkland shooter Nikolas Cruz blasted the jury’s decision to spare his life in an emotional press conference following Thursday’s sentencing.

“This animal deserves to die. He hunted all these people. He planned this for months,” said Mike Schulman, whose son Scott Beigel, a geography teacher at Marjory Stoneman Douglas High School, was killed by Cruz as he tried to shelter students in his classroom.

“The last thing my son saw was the gunman aiming at him,” Schulman said.

Debra Hixon, wife of slain athletic director Christopher Hixon, said she was “completely devastated and shocked” by the jury’s verdict.

“Really, right now it feels that his life is more valuable than Christopher’s, and that is not true,” she added.

Hixon’s son Corey had grown emotional as the jury read out its verdict, getting up and leaving the room before the sentencing decision was announced.

“This person is still being punished,” she said of Cruz. “Life or death, our life doesn’t change at home — we don’t have Chris. Our family is not whole anymore.”

Cruz pleaded guilty to the slayings in 2021, admitting to the 2018 Valentine’s Day massacre that killed 14 students and three teachers — many of them shot a second or third time at close range.

The jury, tasked with deciding if Cruz would be sentenced to death, ruled that while the state had proved Cruz’s actions were enough to warrant the death penalty, “mitigating circumstances” presented at trial led the panel to opt for life in prison.

Lawyers for Cruz contended he’d suffered brain damage that began with his biological mother’s heavy drinking while pregnant. They also argued that Cruz’s mental illness deepened due to watching his adoptive father die from a heart attack at age 5. His adoptive mother also passed away just four months before the massacre.

“I promise you, throughout this nation there are people who had a more difficult time growing up than this shooter,” said Tony Montalto, whose daughter Gina was among the students Cruz gunned down.

“They did not choose to enter a school with a high-powered weapon and pull the trigger 139 individual times,” he added. “That should have been punished to the maximum extent of the law.”

“Gina, my beautiful, kind, bubbly, bright daughter, deserved better than she got from the schools, and certainly from this jury,” he said.

Asked what he had to say to those who opposed the death penalty or would argue that a life sentence was itself a brutal punishment, Montalto said simply, “I’ll trade places with you.”

“Trade places with me, you’ll change your mind,” he said.

Cruz will be officially sentenced by Broward Circuit Judge Elizabeth Scherer on Nov. 1.

Is ‘Luckiest Girl Alive’ Based on a True Story? Author Details 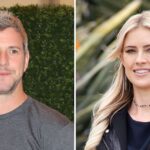 Ant Anstead Slammed for Pic of Son After Christina Drama