Beth Pensky, a 54-year-old single mother from New Jersey who now lives in Florida, never tells anyone that she’s estranged from her only son and daughter.

“I lie all the time,” said Pensky, who told The Post her kids have rejected her because they’re “woke” and she is not. “I can’t tell anyone I don’t have a relationship with them. I had so much shame about it. It looks awful for me and makes me feel terrible so I lie.”

But her attitude changed when she — and a number of other mothers — read a Post story in November about Annabella Rockwell, a graduate of Mt. Holyoke College who claimed she’d been “totally indoctrinated” into hard-left ideologies at the school and had to be deprogrammed.

“I saw Annabella’s story and my life turned upside down,” Pensky said. “I realized I wasn’t alone and I saw what happened to her was similar to what I think happened to my kids. I never even considered trying to find a deprogrammer. I didn’t know they existed. But I think it’s too late for me and my kids. They won’t even talk to me.”

A Manhattan mother of five daughters told The Post she saw their indoctrination into gender and race ideologies start at Dalton, one of New York City’s poshest private academies — and worsen when her girls went to colleges. Most of them went to Ivy League schools.

“The emotional stress is unbelievable,” said the mother, who did not want to be publicly identified. “I consider myself a Democrat and a liberal but it doesn’t matter. I’ve had fights with some of my girls just because I wouldn’t get myself a Rainbow pride Starbucks cup. The cup itself became this huge battleground. Apparently it matters what cup you hold.”

The mother said two of her daughters have tried to estrange themselves from her because they’re critical of what they see as her lack of political correctness and disinterest in gender and race ideology.,

“We actually would be estranged if it weren’t for me giving up,” the mother told The Post. “I keep coming back to the battlefield. I wanted a deprogrammer but didn’t know where to get one so I try to do it myself.”

K. Yang, 36, a former activist for trans and gay rights in upstate New York at one point identified with “they/them” pronouns. But she said she deprogrammed herself before becoming a full-time deprogrammer in 2018 — and is now busier than ever.

Yang often leads anti-gender ideology protests at gender clinics and prisons, as well as at the National Monument in Washington, DC, and outside the United Nations. A typical YouTube video of hers is titled “Blurred Lines: The Agenda to Confuse Children About Sex & Gender.”

“A lot of these parents are completely bewildered,” Yang said. “A lot of them noticed a marked difference in their children’s behavior. Then all of a sudden ‘she’ identifies as ‘he.’ A lot of this is like a cult except parents don’t realize their child is being indoctrinated — not from an old-fashioned cult that takes you away somewhere but through schools and their devices. This is happening to kids everywhere, even those with a robust family life.”

Tennessee-born Ted Patrick, now 92, was well-known and often controversial in the 1970s and 1980s as the “father of deprogramming.” He helped hundreds of parents deprogram their children after getting them out of cults like the Moonies, the Hare Krishnas and the Children of God. He got into the work, he said, because his own son had joined a cult.

The problem, he told the Washington Post in 1979, was naivete: the college-educated ignorant, Patrick called them.

“That’s how they get these kids into these cults, ’cause they don’t know better!” Patrick said at the time. They haven’t seen the hard-core life! Man, I grew up with my daddy running numbers and the bootlegger in the apartment downstairs.”

Patrick, who lives in San Diego, told The Post that he still helps parents — and that deprogramming work is more in demand than ever. He claims to have deprogrammed more than 2,600 people in his career.

“It’s worse now than it was then,” Patrick said of the 1970s. “But parents are more scared and weak than they were then. You’ve got to get these kids alone. I’ve snatched people from Yale. I deal with the mind. You have to go into the mind, into that container, and bring the real person out. Once you get the person out you have to get the person thinking again — thinking like a critical thinker.”

Another mother named Dorothy, who did not want her last name used, also recognized her struggles with and near-estrangement from her 27-year-old daughter when she read The Post story about Rockwell.

The two had long been close but when her daughter went to a prestigious college out West and began taking gender studies and women’s studies, everything changed.

“Reading about Annabella was the first time I connected the dots to everything that had happened with my daughter,” Dorothy said.

Dorothy said they have been estranged off and on since her daughter’s sophomore year in college, with the young woman once refusing to go to Thanksgiving dinner with the family because she said they were celebrating “Columbus’ genocide.”

“She had what she called ‘an awakening’ and became very angry at me and her father,” Dorothy said. “It was a big personality change. We are conservatives so [political leanings] became a huge problem. We were not allowed to visit her on campus. She went on a mission to convert her brother against us. She told him that he should be against us because we’re conservatives and that we all should be against men.

“What really scares me,” Dorothy added, “is that it reminds me of the Cultural Revolution in China where there was a whole lost generation of kids who hated their parents.”

Yang’s own family escaped China during the Cultural Revolution led by Mao and his Red Guards, but she still fell for what she said are similar indoctrination methods taking place in the US.

She began her career as a trans activist in 2012 at a gender center in upstate New York, Yang said. Part of her work involved visiting local businesses, doctors and even bars to offer free “cultural competency training” to “educate” employees on gender ideology. She and her co-workers also brought what she says she now believes was “propaganda” about gender into high schools and junior highs in the region.

“I thought I was on the cutting edge of promoting rights for gay people,” Yang said. “But then I started looking deeper into where this was coming from and who was paying for it, and I started to get very disillusioned. We were with children talking about sexuality and gender identity without the knowledge or consent of their parents.

“When you really dig down you can see how much of this comes from documents and plans at the United Nations,” Yang said, referring in part to the UN’s “Gender Equality” initiative.

“It’s part of a global agenda to restructure society, re-structure our social norms and the economy,” Yang claimed. “They are undermining the sexually dimorphic nature of reality and breaking down the differences between the sexes to break down our identity. They are constructing identities for us and they want us to adopt them.”

Both Beth Pensky and Dorothy’s daughters came out as lesbians in college but neither mother said they had a problem with that.

“What was upsetting was how she acted toward us,” Dorothy said of her child. “The few times we were allowed to visit her at college, she would barely speak to us and sometimes just walk away from us with no explanation and ignore us for the rest of our visit. I walked on eggshells with her. I am a people-pleaser by nature and I don’t know how to deal with that anger.”

Pensky, like a number of other mothers who reached out to Rockwell’s mother, Melinda, believes that her kids began to be conditioned into a new hard-left way of thinking when they were just teenagers in Monmouth County, NJ.

“In junior high they’d come home saying they wouldn’t say the pledge of allegiance anymore,” Pensky said. “They told me boy and girl bathrooms were wrong and they should all be gender neutral. That’s how it started.”

It got worse when her daughter, Hailey, now 27, went to the University of Massachusetts, Amherst, and her son Joshua, 24, went off to Northeastern University in Boston.

Once they were out of the house, she believes the two were overwhelmed with politically correct dogma at their respective colleges and turned on her.

“If you hate your kids and you never want to see them again, send them to school in Massachusetts,” she said.

Pensky’s relationship with the kids worsened when she moved to Florida.

“That’s when the break really happened,” Pensky said. “They told me that Florida is full of white supremacists and that I was becoming one. My son said Florida is a scary place full of racist people.”

Joshua hasn’t spoken to his mother in four years; one year ago, Pensky said, Hailey told her mother not to contact her anymore.

Yang is sympathetic to both parents and children who became estranged over what is taught at school and seen on the Internet.

“Children aren’t stupid and they recognize there is injustice in the world,” Yang said. “And, of course, kids don’t want people to suffer and they want to help. So the people behind this new ideology hook them with that and that’s how they get to them. Once they get you in, they can get you to do anything. They subvert the will of the self and replace it with the will of the group … Most kids don’t realize they’ve been made part of a group — and they’ve been activated.” 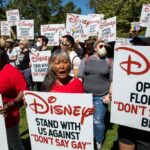 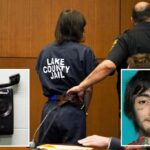