A man and a woman have been arrested in connection with the killing of a young California mother who was struck by a stray bullet during a gang-related shooting earlier this month.

Mark Remmers, 19, and Brooke De La Cruz, 24, both from Orange, were arrested on suspicion of murder in the Dec. 4 fatal shooting of Maria Del Refugio Mora, the Santa Ana Police Department announced Sunday.

Mora, a 36-year-old married mom of three, was walking out of a convenience store in the 1400 block of South Cypress Street just as her husband and their youngest child were exiting a nearby pizza shop when gunfire erupted.

According to police, the occupants of a white sedan jumped out of the vehicle and opened fire in the direction of two passing teenage boys.

The teens fled into the parking lot that Mora was crossing to meet up with her family, and one of the bullets fired at the youths struck the woman in the upper torso.

The husband said during a press conference that he saw his wife smile at him and then a moment later heard her scream. The couple’s 3-year-old son was present at the time of the shooting.

Mora was taken to a hospital and died five days later. The two teens allegedly targeted in the attack escaped unharmed.

Police said in a statement that during the investigation, detectives were able to identify the getaway vehicle used in the crime, a white Toyota Camry, which ultimately led to the identification of the suspects.

Remmers was arrested Thursday in the city of Costa Mesa, while De La Cruz was busted that same day driving the Camry in Orange.

“The collateral killing of an innocent bystander, a mother of three, by a gang-related shooting should never happen in our communities, especially during the holiday season,” Police Chief David Valentin stated.

“Our deepest condolences go out to the victim’s family, particularly to her three children, who will have to spend this and every other holiday without a mother,” he added.

Valentin said Remmers, described as a known gang member, is the accused triggerman while De La Cruz was allegedly driving the getaway vehicle.

At the time of the attack, Remmers was out on bail on multiple felony weapons charges, according to court records.

Cops are still looking for two additional suspects who were said to be in the car at the time of the shooting. 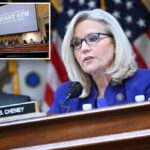 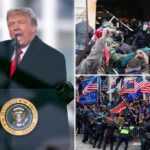