The gunman who opened fire in a St. Louis high school on Monday, leaving three dead and wounding several others, has been identified as a 19-year-old former student Orlando Harris.

Harris was killed by St. Louis Metropolitan Police during a shootout. Cops IDed the teen just hours after the tragedy at Central Visual & Performing Arts High.

A 16-year-old student Alexis Bell was pronounced dead at the scene and a 61-year-old physical education teacher Jean Kuczk later died at the hospital.

The shooter allegedly shouted, “You’re all going to f—ing die!” before going on his rampage.

In a terrifying video posted to TikTok, students can be seen hovering under desks as loud gunshot blasts can be heard outside the classroom.

Cops said that Harris graduated from the school last year. It was unclear Monday evening whether the shooter knew his victims. 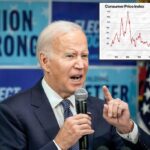