The OnlyFans model who knifed her boyfriend during an argument broke down in tears as detectives informed her of his death in an interview room.

Courtney Clenney, 26, was visibly shocked by the news of Christian Obumseli’s April 3 death in footage from the Miami Police Department’s interrogation obtained by The Post.

The footage starts with the Instagram model, who made some $3 million on the adult site under the name Courtney Tailor, in her dressing gown waiting for the interview to start.

She puts her hands as if she was praying and looks down at the table, speaking too low for the camera to pick up her words, before the officers interviewing her walk in.

Clenney testified she threw a knife at Obumseli during an argument, which severed an artery and led him to bleed to death, an action she claims was in self-defense. Prosecutors give a different version of events and claim she stabbed Obumseli. Bloody crime scene photos show both Clenney and the apartment they shared covered in blood.

After being told Obumseli was being monitored by attendants who needed to perform tests and X-rays, Clenney perks up.

About three hours later, detectives tell Clenney the cryptocurrency trader had passed away.

“So, we have to inform you that Christian did not make it,” a plainclothes cop responds in the video. “The doctors did what they could and…”

“Christian is dead?!” Clenney interrupts while clutching her chest.

“Oh, my God!” she exclaims through heavy breathing, while placing a hand over her mouth.

“This is not real, right?,” she asks after a long second pause. “Okay there’s no f—ing way.”

“Can I please have a hug? Am I allowed to do that in here?” Clenney asks the two detectives in the room after they confirm Obumseli’s fate.

The officer that had broken the news then stood up to embrace her but the distraught suspect changed her mind.

Clenney then clutched her midsection and leaned over a garbage can on the floor in front of her chair for about a minute before once again asking the officers if they were lying.

“No that’s not true! she exclaimed with emotion. “That’s not … that didn’t … that’s not real right?” she stuttered.

“That is real,” the officer responded.

“I know. I just can’t believe it,” Clenney replied.

Secret recordings of altercations between the pair made by the victim before the deadly attack painted a picture of their volatile relationship.

In one recording, Clenney, who is white, called Obumseli, a black man, the n-word while barking at him to fetch and charge her phone.

“Shut up and let me slap you, dumb a–!” Clenney demanded as Obumseli apologized for failing to tell her he said hello to a mutual female friend.

Clenney’s defense point out she had asked for a restraining order against her boyfriend days before the fatal fight, and a security guard at their $10,000-a-month apartment building told cops he once saw Obumseli rush at her, according to police bodycam footage.

In another clip recorded by the stabbing victim before his death, and obtained by WSVN-TV, Clenney was heard threatening to kill Obumseli.

Text messages between the two also revealed Clenney had allegeldy stabbed Obumseli in the leg before the incident. Cops who testified at a bail hearing also pointed the finger at Clenney.

“I learned that Christian was always the one trying to calm the situation down,” Miami Det. Yermaine Briceno told the court last month.

“Based on the messages and everything else. He was always the one getting hurt. And the defendant is the one unable to control herself and hurt him.”

After the fatal stabbing, Clenney wired her father $1.2 million and bought a lavish $1.35 million home near Austin, Texas close to her parents, according to prosecutors.

She was arrested at a Hawaii rehab center she had checked herself into after claiming she suffered a nervous breakdown.

A judge denied Clenney’s request for bail, writing in their ruling: “There is no dispute that Defendant killed Victim in this case … the only factual issue in dispute is whether Defendant was acting in self-defense.”

The case is set to be tried early next year. 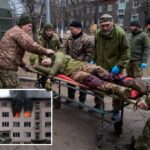 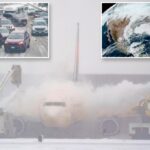