A 15-year-old Florida youngster died early Sunday after he and two teen pals stole a silver Maserati for a high-speed joy ride, crashing it into a business sign and flipping over, authorities said.

The surviving teens were critically injured in the pre-dawn crash in St. Petersburg, Fla.

The three friends swiped the unlocked luxury sports car from a driveway — its keys still in the ignition — around 3:30 a.m., Pinellas County Sheriff Bob Gualtieri said during a press conference.

The car was going at a high rate of speed without its headlights turned on before the driver lost control, jumped a curb and crashed, flipping over the 2016 silver model, Gualtieri said.

“This is what happens when you’re an inexperienced driver at 3:30 in the morning driving 80 miles an hour and you lose it,” Gualtieri said. “And unfortunately one has lost his life, the other one looks like is going to lose his life and the other has some pretty serious injuries.”

None of teens had a driver’s license, he added.

Deputies in a helicopter spotted the stolen car while they responded to another incident in the area; authorities on the ground tried to stop the teens, but they sped away, Gualtieri said.

The deputies in their vehicles didn’t chase after them, sticking to department policy, the sheriff said. Instead, the helicopter kept watch on the speeding luxury car, Gualtieri said.

“Once the deputies disengaged they didn’t slow down,” he said of the teenagers. “They just kept going at a high rate of speed.”

More information, including footage from the dashcam and helicopter, is expected to be released Tuesday.

The parents of the high schoolers believed their kids were asleep when they snuck out in the middle of the night, Gualtieri said, adding the parents were devastated by news of the fatal incident.

The three pals were stopped by cops last month after they were seen walking around a residential neighborhood before dawn, dressed all in black and with their faces covered, the sheriff said. The boys’ parents were told about the incident, which was documented before the teens went home, he added. 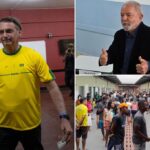 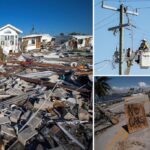