A Brooklyn woman is suing former Mayor Bill de Blasio after she tripped on the uneven sidewalk outside his house and knocked four dental crowns out of her mouth.

Carole Kolb-King said in a Friday lawsuit that de Blasio, his wife Chirlane McCray, their neighbors and the City of New York are to blame for the June accident.

The suit claims they all knew that the sidewalk split at a hazardous junction between the 11th Street properties — but “willfully and negligently failed” to fix it.

The filing alleges de Blasio and McCray had “actual and constructive notice” of “the dangerous nature” of the sidewalk because they had made formal complaints to the city about the “raised and uneven” path.

“He did about as good a job taking care of his house as he did taking care of the city for eight years,” the Windsor Terrace woman told the Daily News.

Kolb-King also named the Transportation Department and the Parks Department in her lawsuit.

Kolb-King told the outlet she was walking to the post office to mail a check to her nephew on June 25 when she tripped on the sidewalk.

Her foot had gotten caught in a one-inch wide hole outside de Blasio’s home.

The woman landed on her face and knocked four dental crowns from her mouth. She had them implanted just one year prior, she said. She also smacked her knee into the pavement and tore her meniscus, she told the newspaper.

A bystander noticed Kolb-King covered in blood and called 911, she said.

Kolb-King insists she has suffered “serious injuries” to her mouth, face, and jaw as well as “mental anguish” as a result of the tumble, according to the suit.

Her injuries will be permanent, have required about $5,000 in medical care so far and has prevented her from performing her normal “activities and duties,” Kolb-King’s attorney Ezra Glaser her attorney said.

She still requires a series of dental procedures and physical therapy sessions, the lawyer added.

The property is one of two Brooklyn homes de Blasio and his wife own. 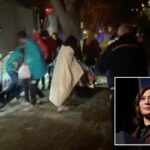