Heartbreaking photos have emerged of the Manhattan mom killed by a stray bullet on the day after Christmas enjoying vacations and doting on her family, who described her as “generous and kind” to a fault.

“[She was] buenisima– a very good woman, a doting mother,” Vincente Garcia told Eyewitness News of his wife Valeria Ortega.

“[She was] generous and kind almost too much for her own good.”

Ortega, 64, was walking to the supermarket with her son near Dyckman Street and Vermilyea Avenue in Inwood Monday morning when she was shot in the head.

Photos from Ortega’s Facebook page show her enjoying time with family and going on vacations. Her last public post in September celebrated her mother’s 101st birthday.

“Congratulations on your [101st] birthday mom,” Ortega wrote alongside a photo of her elderly mother posing with pink balloons.

Police said Tuesday that Ortega was an innocent bystander in a conflict between two moped drivers and an individual in a dark, four-door sedan.

“[The individual] in the car fired in the direction of the mopeds,” police said Tuesday morning. “No one else was struck.”

No arrests have been made in the shooting. The two moped drivers were last seen fleeing south.

“[Ortega] had already fallen to the ground,” Edgar Garcia, a clerk at the nearby GNC store, told The Post shortly after the shooting. “I just saw her lying there while blood was leading…She was laying face-flat near her cart and I just saw the blood splattered.”

Ortega, who had lived in the neighborhood for 30 years, was subsequently declared dead at Harlem Hospital. Her blood-spattered scarf remained on the sidewalk for several hours.

“My son, he said, ‘Look at my mother,’” Vincente Garcia lamented at the scene.

Anndel Taylor dies after getting stuck in Buffalo snowstorm 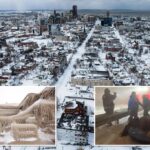