This’ll get you higher than Air Force One.

A New York City man was busted with $300,000 worth of cocaine — some in packages bearing President Biden’s picture — stashed inside his sports car, authorities said Wednesday.

Reynaldo Almonte, 29, was indicted in Manhattan Supreme Court on a string of drug-related charges after cops found the Biden-brand coke hidden in his burgundy Nissan on Nov. 28.

Officers spotted Almonte, of Queens, carrying a “weighed shopping bag” into his car and then noticed him moving objects around in the back of the vehicle, the Office of the Special Narcotics Prosecutor said in a statement.

Cops followed Almonte to the West Farms neighborhood in the Bronx, where they approached him after he double-parked.

Investigators said they found a bag containing $50,000 in cash on the floor in front of the front passenger seat.

With the help of a K-9 unit, officers and agents, including from the US Drug Enforcement Administration, discovered a hidden trap compartment in the back passenger area — where six kilogram-size cocaine packages wrapped in plastic and $7,000 was stashed.

One of the packages bore Biden’s photo, and labels on other packages included an image of a cat and the letters “AMG.”

“Cocaine continues to be significant factor in overdose deaths in New York City. Cocaine has always posed significant health risks, but it is now commonly mixed with fentanyl, methamphetamine and other deadly substances, increasing risks to users. Taking thirteen pounds of cocaine off of our streets will save precious lives,” Special Narcotics Prosecutor Bridget G. Brennan said in a statement. 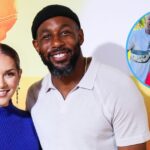 tWitch, Allison Holker Talked About More Kids Before He Died