A New York City fugitive who had been on the lam for nearly a year was arrested last month after a federal officer working his case miraculously spotted him while on vacation at Walt Disney World.

Federal postal inspector Jeff Andre was hanging out in the Florida amusement park’s Animal Kingdom on Oct. 20 when, in an incredible stroke of luck, he saw Quashon Burton, who fled his Brooklyn home last November after being accused of fraudulently obtaining coronavirus relief aid, WDWNT reported.

Andre, who signed the criminal complaint against Burton, recognized the 31-year-old fugitive by a unique cursive letter H tattoo on his neck.

Burton was accused of stealing the identities of at least four people in order to fraudulently take out government PPP loans meant to help businesses struggling during the pandemic, according to the federal complaint.

Prosecutors said Burton used an ATM to purchase money orders from a New York City post office to get the cash after the loans were approved.

In total, he allegedly stole about $150,000 in forgivable federal loans.

In the complaint, prosecutors noted that Burton “has clearly demonstrated an ability to mask his true identity to evade law enforcement. So too has he demonstrated a willingness to lie about this identity to avoid arrest.”

When law enforcement officers went to bust Burton at his home, he was nowhere to be found and was declared a fugitive.

While at large, Burton allegedly continued to use fake identities — including for his visit to Disney World, WDWNT reported.

After Andre spotted Burton around 3 p.m., he called the Orange County Sheriff’s Office and told them that a fugitive was in the amusement park, according to a sheriff’s report obtained by the outlet.

Police confirmed that Andre was a federal postal inspector and reviewed a photograph of Burton before they confronted him an hour later as he waited at a bus stop with two of his family members, the report said.

Burton refused to provide his ID when a deputy asked and resisted arrest until the deputy took him down to the ground.

He refused to admit he was Quashon Burton even after fingerprints proved his true identity. He was charged with resisting arrest and handed over into federal custody.

Middle Florida Magistrate Judge David Baker ruled on Oct. 27 that Burton could be released with electronic monitoring and pretrial supervision in New York, among other conditions, WDWNT reported.

Prosecutors in New York requested that Burton remain in custody, calling him “an extreme risk of flight.” On Thursday, Judge Lewis Kaplan from the Southern District of New York agreed and ruled he should be held without bail before his trial. 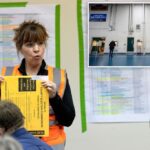 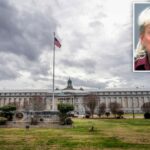