An ex-con was held without bail on manslaughter charges Saturday in the shoving death of a straphanger on the Upper West Side.

Andre Boyce, 28, was arraigned in Manhattan Criminal Court for allegedly pushing a 34-year-old man onto the tracks at the 96th Street subway station during an argument.

The victim, who fell around 2 a.m. Friday, cracked his head and later died of his injuries, authorities said.

Boyce allegedly tried to flee after the incident, and was only caught because police were already at the scene when it happened, Manhattan Assistant District Attorney Gow Mosby said.

Boyce “has every incentive to flee and no incentive to return to court,” Mosey argued as he asked the court to send the suspect to jail without bail.

Boyce’s attorney, Amanda Barfield, disagreed and implored the judge to set bail, claiming the accused has had a clean record since going on parole in March 2022.

“The defendant has three prior felony convictions, two of them violent, at least one failure to appear, multiple arrests, the people are taking his crimes very very serious,” Kiesel said. “I see no amount of bail that would ensure your client’s return unless remanded.

Boyce, who wore a white jumpsuit during the proceeding, had been released from prison in March after serving almost seven years in Sing Sing Correctional Facility for attempted robbery.

Department of Corrections records show that he was set to be under post-release supervision until May 2026.

Boyce had also been jailed for a year in 2012 for another attempted robbery before he was released on parole. 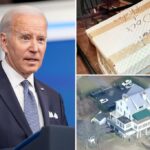 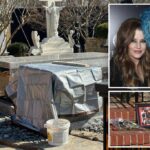 Lis Marie Presley’s sarcophagus revealed at Graceland ahead of ceremony