A newly released recording of a 911 call captures the chilling moment a passerby reports the gruesome discovery of the bullet-ridden bodies of teenagers Lyric Woods and Devin Clark in North Carolina earlier this month.

The audio was released by local officials as the Orange County Sheriff’s Office continues its search for the 17-year-old suspected of fatally shooting the teenage friends.

The next day, a group of ATV riders found the high schoolers’ bodies near power lines in Mebane.

“I guess I was just calling in to report a non-emergency, but it is a pretty serious issue. I would like to speak to the officer in person, but what we have found is, we’ve actually discovered two dead bodies,” the witness told an operator in the 911 call obtained by Fox News.

He said the bodies were near a gravel road beneath the power lines that ran parallel to an ATV path.

“They’re just laying on the side of the road,” the caller told the emergency operator.

A memorial now stands in the place where the teen’s bodies were discovered. A wooden cross was erected and locals have placed dowers and other mementos at the scene in the days since.

Woods, a freshman at Cedar Ridge High School, and Clark, a junior at East Alamance High School, were friends with one another, according to their families. However, it’s unclear how they ended up shot to death underneath power lines together.

The Orange County Sheriff’s Office announced it has identified a 17-year-old suspect wanted for two counts of first-degree murder.

The office has remained tight-lipped on details due to the suspect being a minor, thus protected under state laws. 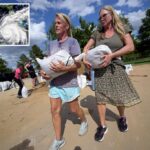 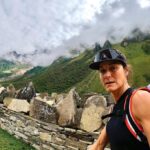