Wind gusts of up to 70 mph were expected to shake much of central California, including the Bay Area and San Francisco, Fox Weather reported.

More than 200,000 homes and businesses were without power early Thursday, according to poweroutage.us.

The extreme weather is expected to continue into the morning, prompting authorities to issue evacuation orders to areas such as Santa Cruz, where flooding is a major concern.

Coastal areas could see between five to eight inches or rain, while mountainous regions will face eight to 12 inches in some spots, according to Fox Weather.

Much of the state is under a flood warning and some areas were also issued a winter storm warning and a wind advisory, according to the National Weather Service.

Mudslides are also a major concern considering the soil has already been softened by previous storms.

Forecasters were worried the major storm could claim Californians’ lives.

“To put it simply, this will likely be one of the most impactful systems on a widespread scale that this meteorologist has seen in a long while,” a NWS meteorologist in San Francisco wrote in a forecast discussion Monday evening.

“The impacts will include widespread flooding, roads washing out, hillside collapsing, trees down (potentially full groves), widespread power outages, immediate disruption to commerce, and the worst of all, likely loss of human life.”

They warned residents to prepare for the worst.

“This is truly a brutal system that we are looking at and needs to be taken seriously,” the forecaster said.

“We anticipate this may be the most challenging and impactful series of storms to touch down in California in the last five years,” California Director of Emergency Services Nancy Ward told CNN. “If the storm materializes as we anticipate. We could see widespread flooding, mudslides, and power outages in many communities.” 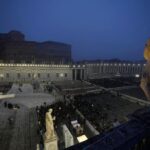 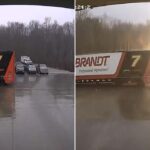