Nancy Pelosi’s son said doctors are slowly putting his dad Paul back together after he was attacked with a hammer during a harrowing home invasion.

The younger Paul was visiting his dad and left the hospital just before 7:30 p.m. local time.

The Speaker of the House also visited her husband yesterday, with sources telling The Post she stayed by his side for several hours.

DePape was allegedly carrying zipties with him and shouted “Where’s Nancy?” according to reports Sunday. He attempted to tie the Democratic Congresswoman’s husband up and said they would wait for his wife — who was in Washington D.C. at the time — to come home.

The elder Pelosi was able to secretly call the police from the bathroom, and when they arrived there was a struggle over the hmmer, resulting in DePape hitting David in the head. He was then arrested at the scene.

DePape is expected to be charged with attempted murder, assault and elder abuse as well as other charges on Monday, and will likely be arraigned Tuesday.

The break-in fueled unfounded conspiracy theories that Pelosi and DePape knew each before the attack that were shared by the likes of Twitter owner and Telsa CEO Elon Musk. The San Francisco District Attorney clarified Sunday that the two men were strangers.

A spokesperson for the Speaker did not return a request for comment, but mother-of-five Pelosi wrote in a letter to her colleagues Saturday “our children, our grandchildren and I are heartbroken and traumatized by the life-threatening attack on our Pop.

“We are grateful for the quick response of law enforcement and emergency services, and for the life-saving medical care he is receiving,” Rep. Pelosi wrote. 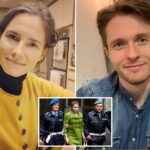 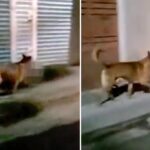 Dog runs with decapitated head in mouth through Mexican town