House Speaker Nancy Pelosi has revealed that her husband Paul was so badly injured in the hammer attack at their home surgeons had to “take off the skull, reshape it and put it back.”

“It had cracked,” a visibly shaken Pelosi, 82, told CNN’s Anderson Cooper of her husband’s skull after it was whacked “on the top, in two places” by a crazed intruder hunting for her.

“What they have to do is they have to take off the skull, reshape it, and put it back so it isn’t scratched or [could] pierce the brain.

“So it’s a pretty serious operation,” she recalled, calling the injury “drastic” or “pretty awful.”

“But the good news was … they told us it had not pierced his brain, which could be deadly,” she said.

The House Speaker looked downcast when reminded that the intruder had told authorities he was hunting for her, not her husband, with the aim of taking her hostage and potentially kneecapping her during an interrogation.

“For me, this is really the hard part — because Paul was not the target, and he’s the one who’s paying the price,” she said of her badly injured husband, who is also 82.

“It’s really sad because it is a flame that was fueled by misinformation … that has no place in our democracy,” said Pelosi, who admitted that brutal attack could influence her decision on whether or not to retire.

She raised a rare smile in the chat, however, as she recalled her husband’s unexpected response when he came out of surgery and was told by their son that his wife was racing to see him.

“The first thing he said, ‘Oh your mother’s gonna be very happy because the Ravens won last night,’” she said with a chuckle of her “dedication” to the Baltimore NFL team.

Pelosi said that her husband is well aware that he has a “long haul” to full recovery, but is “such a gentleman he’s not complaining.”

She admitted that she has yet to hear 911 calls or see any bodycam footage of the attack, and has yet to discuss what happened with her husband because it is “too traumatizing.”

But from what she heard, her husband “was cool. Paul’s cool,” she said, proudly saying that he “called 911 with enough information, but not too much information” to further anger his “threatening” assailant.

“He saved his life — Paul saved his own life with that call,” she insisted.

The alleged attacker, David DePape, 42, has been charged with attempted murder, attempted kidnapping and assault following the Oct. 28 break-in at the Pelosi’s Pacific Heights neighborhood home. 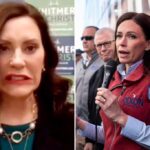 Gov. Whitmer’s audio drops out after asked about COVID regrets 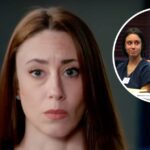