The TLC personality, 26, hosted a live Patreon alongside her husband, Antonio Padron, to answer fan questions after watching the Sister Wives season 17 finale. Blogger @withoutacrytalball shared clips via Instagram from the live session on Wednesday, January 18. At one point, the mother of three weighed in on the relationship between her father, 54, and the Lizzie’s Heritage Inn owner, 52, after being “told by many of the kids and many of the wives” that the former couple had a tumultuous marriage.

“I was never in my dad and Meri’s relationship, I was never there,” she began. “They weren’t physically abusive. There was no hitting. They never hit each other. That’s not dad. That’s never been dad. He’s not a [physically] abusive person. Verbally, emotionally? I think that’s both of them in their relationship. I think they were both unhappy in their marriage, and they might have been emotionally and verbally abusive to each other.”

She then emphasized that Kody was “never abusive” toward Meri. However, Mykelti described the “emotional” abuse the two of them allegedly perpetuated.

“But they did it to each other,” she concluded. “I know that for fact. I’ve seen them do it to each other… There is a two-way street when it comes to the abuse that that personal relationship had.”

Meri and Kody’s split was revealed in part 1 of the Sister Wives: One on One tell-all, which premiered in December 2022.

In her live Patreon, Mykelti later opened up about her take on Meri’s past catfishing scandal, which viewers watched unfold throughout season 9 of the hit reality TV series.

“If you’re gonna cheat on your spouse, you were giving up on the relationship first,” Kody’s daughter, whom he shares with ex-wife Christine Brown, said. “So, it’s unfair for her to get mad at dad for that when she gave up, she threw the towel in. She said, ‘I’m done.’ She cheated first.”

In March 2015, the bed-and-breakfast owner connected with a man named “Sam Cooper” on Twitter, just months after she and Kody legally divorced so that he could wed Robyn Brown in order to adopt her children. Meri and “Sam” exchanged flirtatious messages before eventually communicating through private phone calls and text messages. Six months into the cyber relationship, it was revealed that “Sam” was actually a woman named Jackie Overton, who leaked her and Meri’s private text messages, which even included photos of the reality star posing in a seductive manner.

Mykelti clarified that while Meri “did not have a physical relationship with somebody,” the “catfishing thing” was nevertheless an “emotional affair” behind Kody’s back while the couple remained spiritually married.

“There is a difference between an emotional affair and a physical affair,” Mykelti said, adding that Kody and Meri’s child, Leon Brown, heard Meri “on the phone having intimate conversations” with “Sam” during the affair. 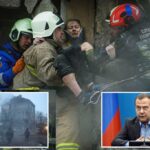 Russia threatens nuclear war if it loses in Ukraine 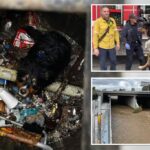 Dog swept away by California flood rescued thanks to Apple AirTag