A “suspect” believed to be a member of Elon Musk’s security team rammed his car into the “crazy stalker” accused of following a vehicle carrying the billionaire’s toddler last week, police said Tuesday.

The new details into the incident were revealed by South Pasadena police, who also noted in a press release that the 29-year-old victim called the bizarre Dec. 13 altercation purely “coincidental.”

The man, identified by the Washington Post as Uber Eats driver Brandon Collado, told police he pulled off the 110 freeway in Los Angeles into a parking lot to use his phone when another car followed and blocked his path.

The man believed to be Musk’s security guard — identified by police as a “suspect” — got out of the car and began accusing Collado of following him, authorities said. Both men recorded the altercation, and Musk uploaded his team member’s version to Twitter the next night.

“Last night, car carrying lil X in LA was followed by crazy stalker (thinking it was me), who later blocked car from moving & climbed onto hood,” Musk claimed, referring to his 2-year-old son X Æ A-Xii.

The apparent security member got back in his vehicle and struck Collado before fleeing, police said. Collado stayed at the scene when police arrived, but never mentioned the other vehicle’s connection to Musk despite his later claims that the billionaire was stalking him and his family.

“At no time during the incident did the victim identify the suspect or indicate the altercation was anything more than coincidental,” police said in a release.

The police report backs up Collado’s claims that he innocently pulled into a gas station lot while making Uber Eats deliveries when Musk’s team member confronted him.

But the police investigation does not clear Collado of stalking allegations. Detective Marc Madero told the Washington Post that in the video Collado looked as though he was trying to hide his identity by wearing gloves and by partially covering his face.

Collado, however, said the altercation confirmed his bizarre theories that Musk is surveilling him, not the other way around.

He said that Musk was monitoring his real-time location and controlling Uber Eats to block him from getting work. Collado also claimed Grimes, the mother of X Æ A-Xii and another of Musk’s kids, was sending him coded messages through her Instagram posts.

The incident between Collado and the security guard happened near Grimes’ LA home. 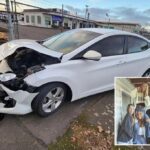 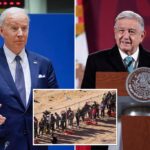 Biden to visit Mexico as migrant crisis continues at border