Numerous sightings of unidentified flying objects have been reported by dozens of pilots flying across the Pacific Ocean over the last two months, according to a UFO researcher.

He compiled accounts of pilots from Southwest Airlines, Hawaiian Airlines and others between Aug. 6 and Sept. 23. In one captivating account, a former military pilot reported seeing multiple aircraft flying above him.

“We’ve got a few aircraft to our north here and he’s going around in circles, much higher altitude than us. Any idea what they are?” pilot Mark Hulsey radioed in on Aug. 18 while flying a charter jet off the Los Angeles coast.

The confused controller responds, telling the pilot that he was not sure.

Hulsey called back 23 minutes later to say that the three aircraft he had originally reported had increased to seven, flying between 5,000 and 10,000 feet above him.

“They just keep going in circles. I was an F-18 pilot in the Marine Corps, and I’m telling you, I’ve done many intercepts, I’ve never seen anything like this,” Hulsey says in the recording.

According to Hansen, the strange lights that some pilots reported as possible aircraft were “seen by upwards of 15 different commercial flights. And at least six pilots are willing to go on record with their names and everything if asked to do so by any investigative agencies,” he said.

“In this case, we have a global phenomenon from as far west as Japan, to as far east as possibly Miami. Whatever it is, pilots are seeing it from halfway across the world.”

Currently, Hansen said there is no official protocol for reporting strange sightings for civilian pilots “because they don’t think the FAA will follow up, or worse they will be ridiculed.”

An FAA spokesperson told the Daily Mail that it documents strange sightings “whenever a pilot reports one to an air traffic control facility.

“If the pilot report can be corroborated with supporting information such as radar data, it is shared with the UAP Task Force.”

Veteran pilot Chris Van Voorhis told The Daily Mail he also saw three to five bright objects flying in a circular motion like a “race track” for hours while flying over the Pacific Ocean from Honolulu to Los Angeles in August.

The 63-year-old, who’s racked up over 32,000 hours of flight experience, said the objects he saw appeared to be within Earth’s orbit but could have been out in space.

Other airlines radioed in to Van Voorhis to ask him if he was seeing the same objects he was.

“It had to be in a very, very high orbit, or actually even out in space quite a ways away from anything that a satellite would be, because every time we were seeing it, it was in the lower right hand corner of the Big Dipper, no matter where we were in the world,” he told the outlet.

“It lasted for such a long time that it actually became boring, almost.”

He said it could not have been a satellite, such as Elon Musk’s Starlink system, because they were moving in different directions instead of the same direction.

Van Voohis’ employer, who’s name was withheld, forbade him from speaking about the incident.

He told the Daily Mail about half of his pilot friends “have seen some type of an anomaly” in the sky.

Van Voorhis also claims to have seen three flying discs from his cockpit in 2004 while flying from Japan to Honolulu for Japan Airways. The discs appeared to form a triangle formation before disappearing.

“It wasn’t like they accelerated. They were just at speed and gone over the horizon. The whole thing took about 15 seconds,” he told the Daily Mail.

“The aircraft in front of us saw it too. They said ‘are you going to tell anybody?’ and we said ‘no’.”

Last year,  the Department of Defense launched a new outfit tasked with finding and identifying UFOs in restricted airspace after Washington officials admitted they could not explain the phenomena of UFO sightings.

The Airborne Object Identification and Management Synchronization Group was announced after the intelligence community verified a series of unexplained aerial phenomena sightings by the military earlier this year, but said it could not identify the mysterious vehicles, in a report to Congress detailing the government’s knowledge of UFOs.

It succeeded the Navy’s Unidentified Aerial Phenomena Task Force, an arm of the military started in 2020 to “improve its understanding of, and gain insight into” UFOs.

In July, The House of Representatives unanimously approved an amendment to the National Defense Authorization Act, making it easier to report unidentified flying objects or UFOs. 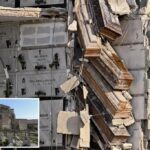 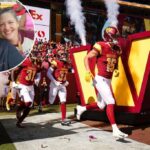