In July, a 29-year-old woman’s estranged husband traveled from Georgia to her apartment building in Chicago to kill her and himself in a murder-suicide after she posted about their failed marriage on social media.

“Sania Khan’s story is a tragic one that should have been prevented. The defendants had known for more than [seven] months that Sania’s estranged husband posed a significant threat to her life,” Chicago attorney Mike Gallagher, who is handling the case, told Fox News Digital in a statement. “And despite this knowledge, the defendants allowed him to walk right past security before escorting him into the secured portion of the building, without even asking to see his identification.”

Gallagher added that had building management personnel followed their own policies, they would have discovered that Sania’s estranged husband, Raheel Ahmad, “was on a ‘no-entry’ list for the building.” They also would have stopped him from entering and walking through the building without showing his ID, he said.

An incident report from the Chicago Police Department (CPD) states that police responded to the 200 block of East Ohio Street in Chicago on July 18 around 4:30 p.m., when they located Ahmad, 36, and Sania, his estranged Pakistani-American wife, both deceased with gunshot wounds to the head.

Police in Alpharetta, Georgia, where Ahmad lived at the time of their deaths, asked the CPD to conduct a wellness check on the 36-year-old, who was a medical student, after his family apparently reported him missing from the Atlanta area. A Georgia officer also alerted CPD that the pair were “going through a divorce,” and Ahmad had traveled to Chicago “to salvage the marriage.”

“She’s very upset that Sania did everything she possibly could do in order to protect herself, including removing [Ahmad] from the lease,” Gallagher said of Sania’s mother, adding that the management and personnel who worked within Khan’s building — The Grand Ohio in Chicago’s Streeterville neighborhood — did not stop to check Ahmad’s ID or alert Sania that he had entered the building that day in July, despite the fact that Sania had alerted the building of the threat he posed to her.

Video obtained by Shazia’s counsel shows Ahmad entering the building on July 18 and walking past security without showing his identification. He met up with a realtor — who is seen on tape showing her own ID to security in a management office — to tour apartments. After two tours, Ahmad allegedly told the realtor that he did not want to see any more apartments and told her that he was going to meet up with some friends in the building, at which point they departed ways.

Ahmad eventually made his way up to the 28th floor, where he apparently entered Sania’s apartment and shot both her and himself in the head.

The 36-year-old can also be seen carrying a garment bag in the footage, which Gallagher said contained Sania’s wedding dress.

Ahmad did this despite having been previously banned from the building based on prior threats he had made to Sania, according to Gallagher.

The lawsuit is not just about blaming the building for not preventing the 29-year-old’s murder, Gallagher said. It is about management failing to complete “their normal security protocols by checking the ID or notifying [Sania]” that he had entered the building, as well as the building’s alleged knowledge that Ahmad posed a threat to one of their residents.

Prior to the apparent murder-suicide, Khan had been posted uplifting videos on TikTok about escaping a toxic marriage and moving on with her life.

“Going through a divorce as a South Asian woman feels like you failed at life sometimes,” she wrote in one video from last month. “The way the community labels you, the lack of emotional support you receive and the pressure to stay with someone because ‘what will people say’ is isolating. It makes it harder for women to leave marriages that they shouldn’t have been in to begin with.”

In another recent post showing off a new tattoo of the Roman numerals for the number 28, Khan said 28 was the year she got married, filed for divorce and “almost died.” Other posts signaled a lack of support from her family over her life choices.

“Sania’s murder received international attention not because of the act itself, but because of the person she was,” Gallagher said. “Over the last [six] months of her life, Sania took to social media to discuss a subject that is taboo in the south Asian and Muslim communities. The issue of divorce and spousal abuse. Sania shared her story and inner strength with others in hopes that they would find courage to stand up for themselves.”

Shazia Khan is “crushed” about what she believes to be her daughter’s wrongful death. “She lost her oldest daughter, [who] was beautiful, talented, intelligent, extremely compassionate and had a very bright future,” Gallagher said. 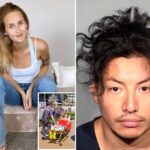