The mom of one of two young teens murdered in Delphi, Indiana in 2017 is demanding answers after learning the girls’ alleged killer lived in plain sight in the tiny community for five-and-a-half years after the heinous crime.

“If this turns out that he is the killer, how did he manage to go unnoticed for almost six years?” Carrie Timmons asked during an interview with Inside Edition.

Police arrested Richard Allen, 50, on Oct. 26 in connection to the killings of Timmons’ 14-year-old daughter Libby German and her 13-year-old best friend Abby Williams on Feb. 13, 2017. He has been charged with two counts of murder.

The bodies of the two girls were found a day after they had disappeared while hiking.

Grainy footage recovered from Libby’s phone showed a man walking near the place where the girls were last seen alive and saying the phrase: “down the hill.”

Allen, a married father of two, lived and worked in the small town of Delphi where the girls lived and died — and where their unsolved murders rocked the tight-knit community of just 3,000 people for years.

Allen was a familiar face to many as he worked at the local CVS — the only pharmacy in town.

Timmons said she long suspected her daughter’s killer had some knowledge of the area, given their ability to get in and out of the Delphi Historic Trails where the girls’ bodies were found. She never suspected the murderer to be a well-known community member.

“It just seemed logical that they had some kind of local ties at the very least,” she said of the suspect. “I didn’t expect him to literally be living right under everyone’s noses.”

Libby’s grandmother Becky Patty told reporters that Allen had even processed photos of the slain teens at the CVS and didn’t charge the family for the cost, the Indy Star reported.

Allen was a regular at a local watering hole, where he interacted with many residents as well.

He and his wife went to JC’s Bar and Grill three to four times a week before it shuttered last year, the bar owner Bob Matlock told the local publication.

Matlock said Allen spoke with other regulars and joined in the conversation when it would occasionally drift to the unsolved murders of the girls and how heart-broken their families must be.

A police sketch of the teens’ suspected killer was hung on the bulletin board of the bar. Allen was photographed at the bar grinning with the sketch directly behind him.

“Pretty brave, bold — like it didn’t matter,” Timmons said of the photo on Inside Edition. “It just seems crazy that he was right there living life every day.”

Many Delphi residents described Allen as a nice and helpful person in the community — not someone they would have ever suspected — in interviews with the Indy Star.

“I’ve been in the business, our business, for a while and I thought, ‘Boy, how’d I even miss that one?” Carroll County Sheriff Tobe Leazenby, who’s been in law enforcement for 36 years and whose department assisted in the multi-agency investigation, told the outlet.

Timmons said Allen’s arrest has left her hopeful for justice, but has also left her with more questions.

“I’ve always said the girls deserve justice and I hope that that’s where we’re headed — that justice is coming,” she told Inside Edition.

“There’s a lot of questions left unanswered — more questions now than there were before,” Timmons said.

Information connecting Allen to the murders and any evidence used to obtain a warrant for his arrest have been temporarily sealed.

Libby would be about to turn 20 years old if she was alive today.

“Regardless of the arrest, it doesn’t bring her back,” her devastated mother said. “I’m still going to be living life wondering what she would be doing at this point or that point.”

Allen was transferred out of the local county jail to a state prison for his own safety. He has pleaded not guilty to the murders. 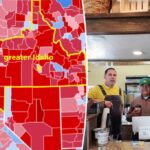 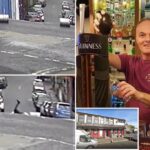