Gripping video captures the moment migrants in El Paso pray in vain as cops rounded them up outside a local church shelter ahead of President Biden’s first visit to the Mexican border on Sunday.

“Cover us, Father, in the name of Jesus,” a man is heard praying loudly in Spanish as cops and US customs agents rounded up as many as 150 immigrants in the Texas border city, a report by NBC News shows.

“They come seeking your salvation, sir,” the man says. “They are looking for a better future. They’re respecting the law, sir.

“We respect the law and they’re doing their job,” he says. “But, father, you have the power to protect them… We pray for them, father, in the name of Jesus.”

City police and US Customs and Border Protection officers swept through the Texas city in the days before Biden’s arrival on Sunday, clearing immigrants from a shelter at Sacred Heart Church and outside a local bus station, the outlet reported.

El Paso has taken the brunt of the record number of immigrants crossing into the US in recent weeks, with as many as 2,500 a day flowing into the city in mid-December.

Well-meaning shelters like the one at the church have been forced to turn away many immigrants as they overflow, with the migrants turning to tent cities instead.

The move to round up the migrants came as Biden made his first trip to the beleaguered border on Sunday — for a brief three-hour visit before heading to Mexico.

In a statement, the federal agency’s El Paso office issued a statement defending the sudden roundup of the migrants.

“CBP, which is responsible for securing the US border between ports of entry, uses a layered approach that includes patrolling the border itself, nearby areas and neighborhoods and conducting checkpoints,” the statement said.

“In response to migrants evading apprehension in the El Paso area, the United States Border Patrol increased the number of agents patrolling the area.”

Meanwhile, the union representing border patrol workers issued a scathing statement, declaring it is “beyond frustrated” with Biden’s lack of action to stem the flow of migrants. 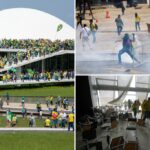 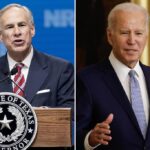