The three busloads of migrants from Texas dropped off near Vice President Kamala Harris’ DC residence in the bitter cold were initially slated to arrive in the Big Apple on Christmas Day, advocates said Sunday.

About 110 to 130 men, women and children were let off near the Naval Observatory in temperatures that hovered around 15 degrees on Saturday night, Christmas Eve.

The group — many among them wearing T-shirts or light sweatshirts — was met by local volunteers who gave them blankets and took them to a local church where they were fed and received shelter.

Volunteers had to scramble to welcome the asylum seekers because the buses were initially scheduled to arrive in New York City on Sunday but were rerouted.

Tatiana Laborde, the managing director of SAMU First Response, said the relief agency assisting the migrants to find food and shelter was alerted by nonprofit groups on the border that the buses would arrive in DC on Saturday instead of New York on Sunday.

Laborde told The Post that she believes the change in plans was due to the the heavy snowfall up north.

“As we have repeatedly said, we are willing to work with anyone – Republican or Democrat alike – on real solutions, like the comprehensive immigration reform and border security measures President Biden sent to Congress on his first day in office, but these political games accomplish nothing and only put lives in danger,” Hasan said in a statement Sunday.

The migrants, mainly from South and Central America, arrived in DC Saturday night after a two-day trip from Texas. It was the coldest Christmas Eve on record for the capital, according to the Washington Post.

Texas authorities have not confirmed their involvement. Republican Texas Gov. Greg Abbott, who has been sending busloads of migrants to New York, Washington, DC, and other Democratic-run cities since the spring, did not respond to a request for comment from The Post Sunday.

In September, Abbott sent two busloads of migrants to Harris’ DC home and continued dispatching them through the fall.

Abbott has been feuding with the Biden administration over its handling of the immigration crisis at the southern border, a dispute that was aggravated by ​the controversy over Title 42 health policy.

The pandemic-era policy, which allows officials to reject asylum-seekers over health concerns, had been challenged in court and was slated to end last Wednesday.

But Supreme Court Chief Justice John Roberts issued an order to keep it in place while the court hears an appeal from 19 Republican-led states to retain it.

Abbott sent a letter last week to President Biden seeking federal assistance to help with the sheer number of migrants before the blast of winter weather reached Texas.

“This terrible crisis for border communities in Texas is a catastrophe of your own making,” the letter said.

“These communities and the state are ill-equipped to do the job assigned to the federal government—house the thousands of migrants flooding into the country every day. With perilous temperatures moving into the area, many of these migrants are at risk of freezing to death on city streets,” Abbott’s letter said.

“The need to address this crisis is not the job of border states like Texas. Instead, the U.S. Constitution dictates that it is your job, Mr. President, to defend the borders of our country, regulate our nation’s immigration, and manage those who seek refuge here.” 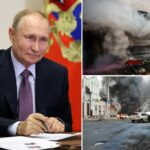 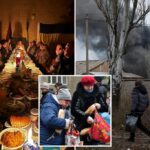 Ukrainians move up Christmas in face of Russian invasion