CCTV footage has captured the moment a brazen thief stole a pet dog outside a Docklands restaurant before scampering out of sight with the beloved animal.

A police probe has been launched after five-year-old Shih tzu Angel was taken from Bourke Street around 8:30 p.m. on Saturday.

The surveillance footage shows a man approaching the dog outside a popular restaurant and patting it while diners sit inside.

He then removes the dog’s leash from the pole and quickly picks the animal up while fleeing.

Melbourne West police have released the footage of the man and videos of the dog, who had just received a haircut, in a bid to find the alleged offender.

Police describe the man as being Indian subcontinental in appearance with black curly hair and a black beard.

He was wearing a bandana as a headband, a black long sleeve polo top with a white stripe on the collar over a white shirt, and light jeans with large horizontal rips across the knees and sneakers.

A spokesman for Victoria Police said the man was last seen walking south along the Bourke Street waterfront carrying Angel.

Investigators would like to speak to anyone who has either purchased or seen the Shih tzu through social media or online marketplaces.

Anyone with information about Angel’s whereabouts is urged to come forward or contact Crime Stoppers on 1800 333 000. 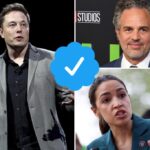 ‘Not everything AOC says is accurate’