It was a killer gift.

Meghan Markle reportedly gave Prince William a spoon with the words “cereal killer” engraved on it for Christmas 2017.

The claim was made in the 2020 tome “Finding Freedom” — penned by Omid Scobie and Carolyn Durand — which has recently resurfaced online in light of the ex-actress’s estrangement from her royal brother-in-law.

Back in December 2017, Markle had just announced her engagement to Prince Harry and was reportedly eager to impress William, fretting over what to buy the future king for Christmas.

The royal family has long traded “cheap gag gifts” with each other for the festive season, leaving the “Suits” starlet in pursuit of the perfect present to highlight her sense of humor.

“Meghan’s biggest challenge was finding the perfect novelty gifts to amuse her new extended family,” Scobie and Durand wrote. “At least one of her gifts was a huge hit — a spoon for William that had ‘cereal killer’ embossed on the shallow bowl end of the utensil.”

William was reportedly impressed by Markle’s punny present, with the actress making a solid impression that Christmas — which was the first she spent with the royal family.

This year, however, Markle and Prince Harry were conspicuously absent from “The Firm’s” festive celebrations at Sandringham as they remain estranged from the family almost three years on from “Megxit.”

Relations between the couple and the rest of the royals are reportedly at rock bottom following the release of Markle and Harry’s new Netflix docuseries, in which they throw shade at the monarchy.

But while couple may no longer be exchanging Christmas presents with William, King Charles III has recently gifted the Montecito-based pair with an olive branch — allegedly inviting them to his coronation on May 6, 2023.

According to the Daily Mail, the new monarch still hopes to reconcile with his youngest son and believes the invite can help them mend their relationship.

“Harry is his son and His Majesty will always love him,” an insider told the tabloid. “While things are difficult at the moment, the door will always be left ajar.” 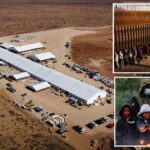 Migrant tent erected at border to prep for Title 42 end 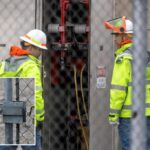