It was a tempest in a tiara — courtesy of Meghan Markle and Prince Harry.

Not long before her 2018 wedding to Prince Harry, Meghan Markle wanted Queen Mary’s bandeau tiara fitted while her own private hair stylist was in London.

The only problem, according to a new book about behind-the-scenes tensions between the Palace and Meghan and Harry, was that the Crown Jewels can’t be picked up and tossed around like costume jewelry from Target.

The Queen’s dresser, Andrea Kelly, had to explain to Meghan and Harry the strict protocol around the Crown Jewels and how adjustments could not be made without arrangements done carefully in advance.

The pair did not take it well, the Sun reported, citing the upcoming book, “Courtiers: The Hidden Power Behind the Crown,” by veteran Times of London royal correspondent Valentine Low.

Kelly, who was upset, allegedly reported his behavior to Queen Elizabeth who “firmly” put Harry “in his place”.

“He had been downright rude”, an aide told author Low. 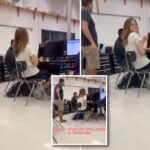 Florida teacher removed after berating student who sat for pledge 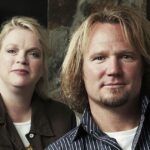 Who Died on ‘Sister Wives’? Family Members Who Have Passed