Meghan King‘s sex life with her new mystery man is so hot right now she can’t help but share it with the world!

“It was the most incredible sex I’ve ever had – I’m not exaggerating,” the Real Housewives of Orange County alum, 38, gushed during a Tuesday, October 19, episode of her “Intimate Knowledge” podcast. The lucky man, who she referred to as “Kenny,” has been friends with the reality star for seven years before things suddenly took a romantic turn.

“I’m so mind-blown by this that right before I got on my plane to come back, I called him, and I said, ‘I don’t understand. Why is the sex so good? Is this about lust?’” she continued.

Meghan said that she flew into his city for a business meeting with another pal when the pair decided to meet up for drinks, which led to them “making out.” The entrepreneur recalled, “This is so weird. This is a man I’ve known for seven years.”

Upon returning to visit Kenny again, the pair fell for each other like “long-lost lovers.” Meghan told him that she wanted more than just great sex, explaining she was “not in this for lust,” but “for the real deal,” to which he responded, “I’ll take care of you” and asked her to move to his city so they could pursue their relationship.

“I think I’m in love with Kenny,” Meghan excitedly explained, detailing how their relationship is so “easy” since they’ve known each other for so long and that he is already aware of her “crazy.”

The mother of three has hope that their romance will become serious. “I know this is new, I know I love love, I’m super scared, but I’ve heard of stories like this before and I’m very hopeful,” she said of their future together.

Meghan was previously married to President Joe Biden‘s nephew, Cuffe Biden Owens. The two tied the knot in October 2021 after a whirlwind romance where she made him Instagram official as her boyfriend only one month prior. They split two months later in December and had the marriage annulled. Meghan’s first marriage to former MLB player Jim Edmonds ended in divorce after the pair split in 2019 after five years of marriage. They share three children, daughter Aspen, 5, and twin sons Hart and Hayes, 4.

Fans shouldn’t keep their hopes up that Meghan will be sharing social media photos of her new beau anytime soon. “I told myself I’m done putting people in the public eye, putting people on my Instagram. I’m done with that,” she revealed to Teddi Mellencamp on a July episode of the “Two Ts in a Pod” podcast. 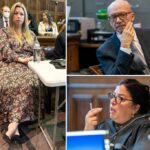 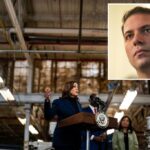