Stallion entered the Los Angeles courthouse in a purple suit as a group of supporters cheered her on, several holding a banner that read: “We stand with Megan.”

The rapper, whose legal name is Megan Pete, seemed incredulous when prosecutors asked if she knew Lanez, the LA Times reported.

“I just don’t feel good,” she said when asked if she was nervous. “I can’t believe I have to come in here and do this.”

Lanez, whose legal name is Daystar Peterson, is facing charges of assault with a firearm, illegal possession of a firearm and negligent discharge of a gun for the July 2020 incident in which he’s accused of shooting the rapper in the feet.

Megan testified the shooting erupted while she and Lanez were driving back from a party at Kylie Jenner’s house. Accompanying them were a bodyguard for Lanez and Kelsey Harris, Megan’s longtime friend.

She said Lanez was upset about being asked to leave the party — and turned around in the vehicle to tell Megan she needed to “stop lying” to Harris about their relationship.

The “WAP” rapper told the court she occasionally had a sexual relationship with Lanez that Harris — who had a “crush” on Lanez — had found out.

An argument ensued, Megan said, and Lanez called both women “bitches and hoes.”

The argument turned to their respective musical careers, Megan said — and she asked to be let out of the vehicle. As she left, Lanez allegedly fired several shots at her, shouting, “dance, bitch!” At least one slug struck her feet.

“I’m in shock. I’m scared,” Megan recalled during her testimony. “I hear the gun going off and I can’t believe he’s shooting at me.”

She told the court she got back in the car and they drove as she tried to stop the bleeding. Meanwhile, Megan said, Lanez promised the women $1 million each if they promised not to tell the police.

The car was pulled over by cops minutes later on Hollywood Boulevard.

Jurors saw body camera footage in which police ordered all four occupants out of the car and onto the ground before detaining them.

Asked why she didn’t initially report the shooting, Megan said she didn’t trust the police and feared for Lanez’s life.

“At the time, we are at the height of police brutality,” she said, referencing the 2020 protests following the killings of George Floyd and Breonna Taylor. ” I felt like if I said ‘this man has just shot me,’ they might shoot first and ask questions later.”

“In the black community, it’s not really acceptable to be cooperating with police officers,” she added.

Lanez didn’t look his accuser in the eye in the courtroom, the LA Times reported — but he took notes throughout her testimony.

The Canadian star’s defense team has suggested the fight was between Megan and Harris — though they have not explicitly claimed Harris fired the shots.

Lanez’s lawyer, George Mgdesyan, has argued his client’s DNA was not found on the gun prosecutors say was used in the attack.

Harris is expected to take the stand later this week.

Lanez faces more than 22 years in prison if charged. 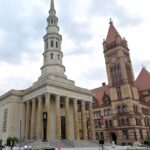 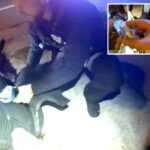 Florida cop treated for overdose after exposure to fentanyl